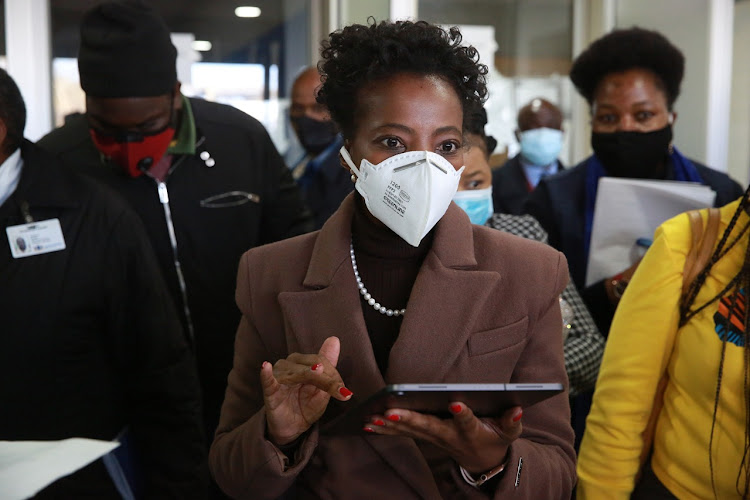 Although she was assured by management earlier in the day that they had sufficient personal protective equipment (PPE) for workers, Gcaleka’s interaction with staff painted a different picture.

“The PPE is there, but it doesn’t come down to workers who need it to protect themselves while busy with their duties. Although they claim to have sufficient PPE, there’s a breakdown somewhere because it never reaches the intended people who need it,” she said.

Ntlane, who spoke to Gcaleka about their challenges on behalf of all workers, also pointed out a lack of support for staff members who test positive for the virus, saying there was no socio-psychological support for them.

The poor quality of personal protective equipment (PPE) gowns is among the challenges workers at Chris Hani Baragwanath Hospital in Soweto have to ...
News
1 year ago

Ntlane added that there was discrimination in testing workers suspected to have the virus.

“Some of the workers have to spend their own money to go for tests. There’s no support and it’s like they are left to be on their own,” she said.

Patients at the hospital also took the opportunity to voice their frustration at the poor service they said they receive at the hospital. Long waiting times were the top complaint from patients, who said they wait for more than three hours to just open patient files.

Maria Nkosi, who was at the hospital to collect her chronic medication, told Gcaleka that they sometimes return home without having done everything they were supposed to do because of the long wait.

“We wait close to four hours to get our files. From there you need to go see a doctor for a consultation, where it will be another four hours' wait, at least. By the time you are supposed to go to the pharmacy ... you find they have cut the line and must make another trip the following day,” she said.

Nkosi also told Gcaleka that it was difficult to find certain places and departments at the facility because there was no proper signage.

Gcaleka said she found that there was not enough staff at the hospital to serve patients, and said this is something that would need to be addressed urgently.

In the trauma unit - where staff said they had seen a decrease in cases when the sale of alcohol was banned - Gcaleka was not impressed to find one patient without a mask on. The patient had been admitted almost 24 hours earlier.

"The workers are busy attending to the patient who doesn't have a mask on. Although I was told they have enough PPE for patients and staff, I wonder why this patient was not provided a mask," she said.

At the hospital kitchen, where meals are prepared for patients, Gcaleka was met with staff sharing a single tap. The other taps apparently broke more than a month ago and are still awaiting repairs.

"This is quite concerning because there is no social distancing in this kitchen because they have to use one tap," she said. 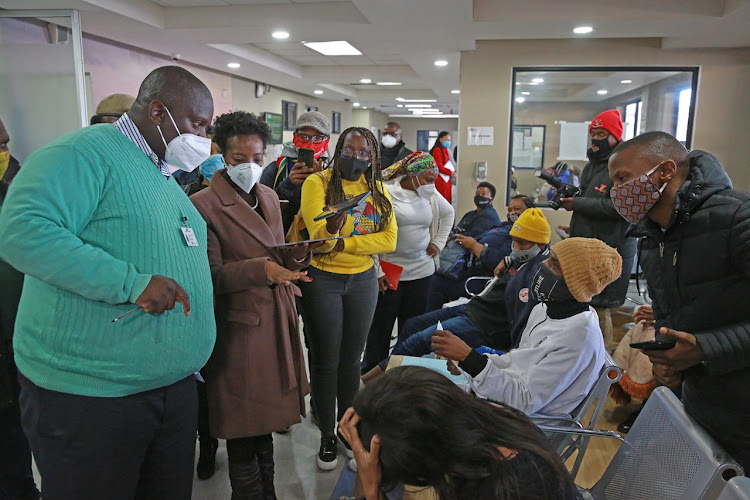 Acting hospital CEO Dr Steve Mankupane assured Gcaleka that the matter would be attended to urgently.

On staff shortages, Mankupane said they had challenges, especially with attracting young doctors. He attributed this mostly to the outbreak of Covid-19.

"Some of the people we had appointed declined our offers at the last minute. I think it had to do with the deaths they were seeing among health professionals in the public health sector," he said.

Head of internal medicine at the hospital, Dr Merika Tsitsi, said with the proper use of PPE and adhering to social distancing, it would be impossible for staff to contract the virus from patients.

Gcaleka was at the hospital as part of her inspection of hospitals reserved for Covid-19 patients in Gauteng. She is examining the infrastructure developed specifically for the fight against the pandemic and is looking at the capacity of facilities in the province.

Denosa provincial chairperson Simphiwe Gada said on Tuesday they had visited hospitals in the province to check on working conditions.
News
1 year ago

For Dr Portia Ngwata, caring for Covid-19 patients means being so preoccupied that you forget to buy food for your two-year-old.
News
1 year ago

A total of 27,360 SA hospital workers - which include doctors, nurses, porters and other hospital staff - have contracted the coronavirus since the ...
News
1 year ago