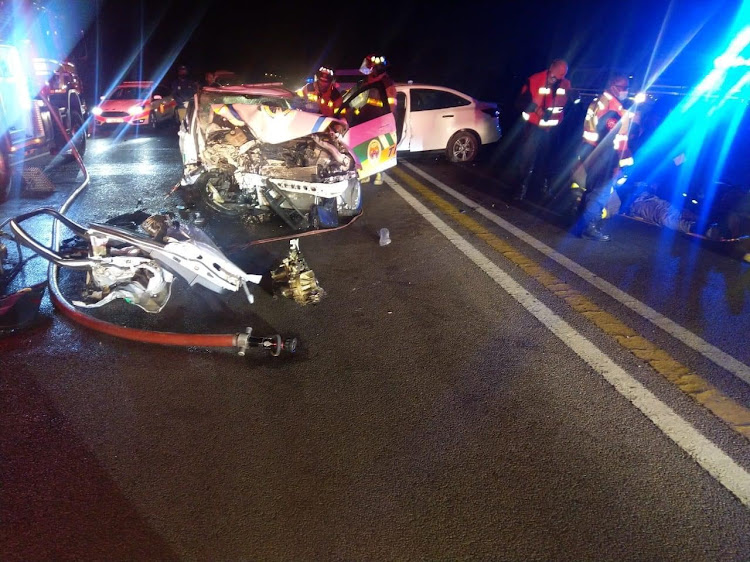 Three officers from the Tshwane Metro Police Department were killed during a head-on collision with a suspected drunk driver in the early hours of Sunday.
Image: Provided

Three officers from the Tshwane metro police department (TMPD) were killed during a head-on collision with a suspected drunk driver in the early hours of Sunday.

The accident occurred on the N4 between Trans Orange Road and Rebecca Street in Pretoria west, according to spokesperson, Issac Mahamba.

“It was about 2am this morning when the officers spotted a vehicle driving recklessly and facing oncoming traffic in the Pretoria CBD. The officers tried to stop the vehicle, which was driving in a westerly direction, but it fled and officers gave chase,” he said.

The officers called for backup and were joined in the chase by three officers in a TMPD vehicle.

“The vehicle in pursuit was then involved in a head-on collision with the TMPD vehicle that was giving backup. The TMPD officers that were inside the vehicle all died on the scene. The driver of the vehicle which was sought also died on the scene. He was driving with a lady passenger who was transported to the nearest hospital,” said the department.

Empty and full alcohol bottles were found in the suspect's vehicle.

The identities of the deceased officers will be released after the their families have been informed, according to the department.

A Johannesburg metro police department officer has died after his vehicle collided with a Toyota Hilux bakkie on the N12 near Protea Glen on Sunday.
News
2 years ago

Twelve hours after the ban on booze sales was lifted, a motorcyclist died after ploughing into a stationary vehicle as its occupants allegedly drank ...
News
2 years ago

As the country entered level 3 of the coronavirus lockdown on Monday, which saw millions of people returning to work, travel time restrictions being ...
News
2 years ago