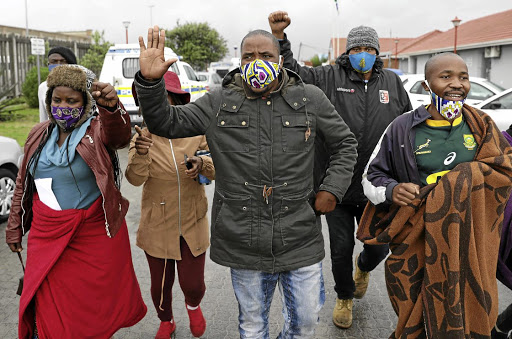 Khayelitsha resident Bulelani Qolani (centre) and supporters at Harare police station, where he opened a case against the City of Cape Town after being dragged naked out of his shack by city officials.
Image: Esa Alexander

Cape Town's anti-land invasion unit will not be allowed to evict people or demolish their homes, whether they are occupied or not, without a court order while the national state of disaster remains in force.

The SAHRC's application followed a widely publicised incident in July in which a naked man, Bulelani Qolani, was manhandled by anti-land invasion unit officers before his shack in Khayelitsha was demolished.

Meer and Allie also ordered that in cases where a court order is obtained for an eviction or demolition, the city council must execute it in a lawful and respectful manner that “upholds the dignity of the evicted persons”.

They said the council is “expressly prohibited from using excessive force” and may not destroy or confiscate material belonging to those evicted.

Two children, aged 8 and 12, were hit by stray bullets during a violent housing protest in Elsies River on Monday.
News
1 year ago

The court gave the city a week to return “all building material and personal possessions” taken by the anti-land invasion unit since May 1 and interdicted it from “considering, adjudicating and awarding” bids and tenders related to demolition services.

The court instructed SA Police Service (Saps) members at a court-sanctioned demolitions or evictions to ensure the actions were lawfully executed and “protect the dignity of the persons evicted”.

In October, hearings will be held to determine whether or not the municipality has the authority to execute demolitions or evictions without a court order after the end of the state of national disaster.

Plato said Tuesday's ruling flew in the face of a well-established principle of common law, counter-spoliation, which allows owners to protect land from invasion by preventing the erection of illegal, unoccupied structures.

"Since July 1, the city’s land protection efforts have led to the removal of over 55,000 illegal structures in around 30 different parts of the metro. There have been well over 100 separate land invasion incidents recorded," he said.

Legality of lockdown evictions in the hands of two judges

Friday saw the second day of hearings in the matter between the SA Human Rights Commission (SAHRC) and others versus the City of Cape Town and the SA ...
News
1 year ago

"The granting of an interdict preventing the city from conducting any counter-spoliation to protect public land without a court order goes far beyond what the constitution and the Prevention of Illegal Eviction from and Unlawful Occupation of Land (PIE) Act allow.

"It sets a dangerous precedent for all landowners. If left unchallenged, the interdict would make it almost impossible for landowners to protect their property from unlawful occupation.

"The knock-on effect of the large-scale orchestrated land invasions we have seen is simply devastating for Cape Town, its communities, residents in general and the city."

Plato said court rolls nationally would be "flooded" with applications from landowners, but the practical effect of the judgment would be that by the time matters came to court, the properties would have been lost to illegal occupation.

"If successful [in October], the SAHRC’s main application could open the floodgates on illegal land invasions, leading to a breakdown in law and order," he said.

City withdraws advert to lease golf club for less than R1,000 a month

A City of Cape Town notice advertising the renewal of a 10-year lease on the 49ha King David Mowbray Golf Club for R11,500 a year, which sparked a ...
News
1 year ago

Bulelani Qholani from Khayelitsha in Cape Town is in pursuit of justice after he was humiliated during evictions last week.
News
2 years ago