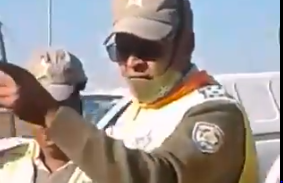 An argument broke out after the driver of the taxi, who had been stopped, refused to give officers his driver’s licence and professional driving permit.
Image: Screengrab of video

The Mogale City municipality has condemned an attack on officials after a taxi driver repeatedly punched a metro police officer.

The council's head of communications Adrian Amod said the incident took place on August 14, after traffic cops stopped an overloaded taxi during a roadblock.

The video surfaced on social media this week.

I really hope that the @SAPoliceService will step up here.

This is bad..... unbelievable pic.twitter.com/SEU80CtWni

An argument broke out after the driver of the taxi, who had been stopped, refused to give officers his driver’s licence and professional driving permit, said Amod. "Upon repeated requests for his particulars, the driver refused to provide the officer with the documents. The officer consequently attempted to arrest the driver," he said.

"In resisting arrest, the driver, who was also backed by one of the male occupants, attacked two of our traffic officers."

Other officers on the scene arrested the taxi driver and took him to Krugersdorp police station, where a case of assault was opened.

"From the incident one can hear members of the public encouraging the taxi driver to beat up the officers," said Amon. "This we totally condemn, as it is a disregard for the law, which through law enforcement we carry out to increase road safety to the benefit of all road users, including taxi passengers."

KwaZulu-Natal MEC for transport, community safety and liaison Bheki Ntuli has urged police to "leave no stone unturned" in finding the perpetrators ...
News
9 months ago

'Come to us, we will protect you': KZN taxi drivers take a stand against GBV

KwaZulu-Natal taxi drivers are taking a stand against gender-based violence and appealing to women to seek their protection should they ever be in ...
News
9 months ago