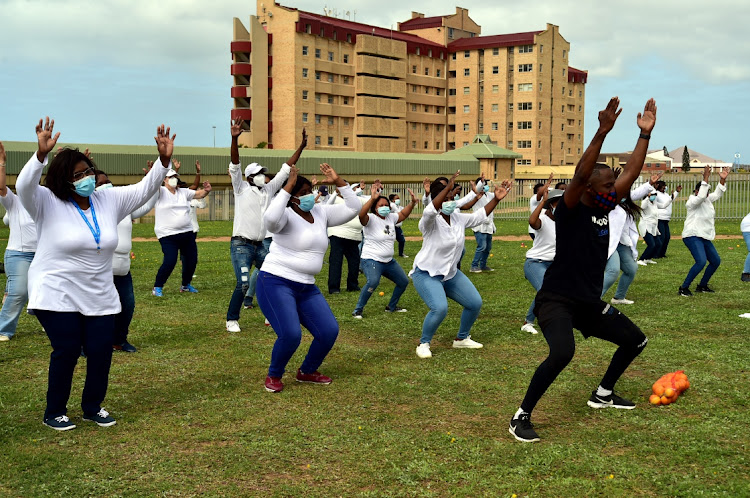 Dora Nginza nurses who survived after being infected with Covid-19 express their gratitude by performing the popular ‘Jerusalema’ dance outside the hospital on Wednesday
Image: EUGENE COETZEE

“For a moment while dancing and doing the #JerusalemaDanceChallenge I forgot about the battle that I have just emerged from after beating Covid-19.”

Dora Nginza professional nurse Selina Ndokolo was one of 49 health-care workers on Wednesday who described their joy as they celebrated surviving the novel coronavirus by doing the popular African electro dance outside the hospital.

Scores of  employees at the hospital contracted the virus as SA and Nelson Mandela Bay health facilities grappled with a spike in the number of cases in the metro in recent months.

Ndokolo, 60, was diagnosed with Covid-19 on June 16 after feeling unwell one morning at work.

“When I got to work on that morning, I didn’t feel like myself and I asked a colleague to check my blood pressure. It was high.

“I got tested on June 11 and immediately quarantined at home.

“Five days later, I received my positive diagnosis,” she said.

Initially, Ndokolo, who lives with her two children, said she was shocked and worried but told herself she would beat Covid-19.

“Thankfully, I didn’t have symptoms such as shortness of breath but I did get headaches and I took a lot of vitamin C.

“My kids quarantined in a back room in the yard and every morning, they would knock on my bedroom window to check if I was still alive because they were so worried,” Ndokolo said.

She said over the months, 304 hospital employees had contracted the virus and 10 had died.

Front-line workers have taken to Twitter to participate in the challenge as a way of boosting morale. .

She said aside from celebrating their recovery, they also wanted to raise awareness because since the easing of regulations and SA moving to lockdown level two, fewer and fewer people were wearing masks.

“We want to tell people not to relax and continue wearing masks, sanitising and washing their hands as well as maintaining social distancing because we’ve been warned a second wave is coming,” she said.

Ngaleka said she also wanted to tell Dora Nginza staff not to be afraid of Covid-19 and continue doing their work and serving its patients.

“Dora reported its first coronavirus case on April 1 and since then, there have been 304 cases [of infected health-care workers] and 10 deaths.

“Today, we also remembered those colleagues we lost because they’ll forever be in our hearts.

“We wanted to show people and show our colleagues that you can beat Covid-19 and we’re living proof of this,” Ngaleka said.

Bonile Nqakula, 49, a housekeeping supervisor at the hospital, thanked his family for their constant support by bringing him his medication and food while he isolated at home.

“I stayed positive throughout and I was supported by family, which made me even more confident,” Nqakula said.

President Cyril Ramaphosa believes that the publishing of the list of all Covid-19 related expenditure is a demonstration of his government's ...
Politics
1 year ago

Five months into the Covid-19 pandemic, financial distress remains a concern among South Africans with as many as 61% reporting a loss of income.
News
1 year ago

Two European patients are confirmed to have been reinfected with Covid-19, raising concerns about people's immunity to the coronavirus as the world ...
Lifestyle
1 year ago