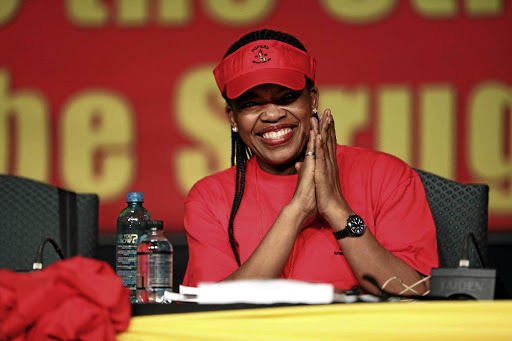 Cosatu says the government must root out corruption and prioritise the safety of front line workers who are complaining of unpleasant working conditions amid the Covid-19 pandemic.

The federation briefed the media on Wednesday about the outcomes of its executive meeting where it discussed the grievances of health care workers, corruption and president Cyril Ramaphosa's letter in which he slammed ANC officials who sought personal wealth by engaging in Covid-19-related tender corruption.

“We're calling for that big axe for those who have been found to be corrupt. We believe that it's going to take political will to ensure that we bring justice to the people of this country because of the number of corruption cases that we wake up to every day. There are tedious processes and people are getting impatient.”

“The case in point is of a person who is facing criminal charges, you're out on bail and are appearing in court and you expect people to trust you when you say the very same person can still run a city in government at the level of the province?”

“We're dealing with issues of workers who work under conditions that are inhumane, not safe. We celebrate them and say these are front line workers, but the PPEs and support that they get from their employer is completely the opposite of the praises we are giving. Covid-19 does not stop workers from demanding what is rightfully theirs.”

“There are 10 families that lost members prior to [16 August]. We have always said that we seem to forget the 10. We have never spoken against the 34 miners that were killed but we have always said that let us remember that Marikana did not start on the 16th. There are incidents that happened prior and lives were lost. This is as a result of the greed of capitalism ...”

“We do not understand why you would suspend payment to workers who are the vulnerable ones and are waiting while you want to figure out things that may have gone wrong in terms of administration.

“We would feel that you are saying, 'we may have done something wrong as government, but the ones who are going to be punished are the ones that are awaiting [payment].'”

Tripartite alliance partner Cosatu is calling for “political pushback” against a “conservative wing" of the ANC, which it says has hindered the ...
Politics
1 year ago

Ramaphosa must 'swing a big axe' over corruption: Cosatu

Cosatu wants ANC president Cyril Ramaphosa to grow a backbone and “swing a big axe” against corruption - or risk losing the support of the working ...
Politics
1 year ago