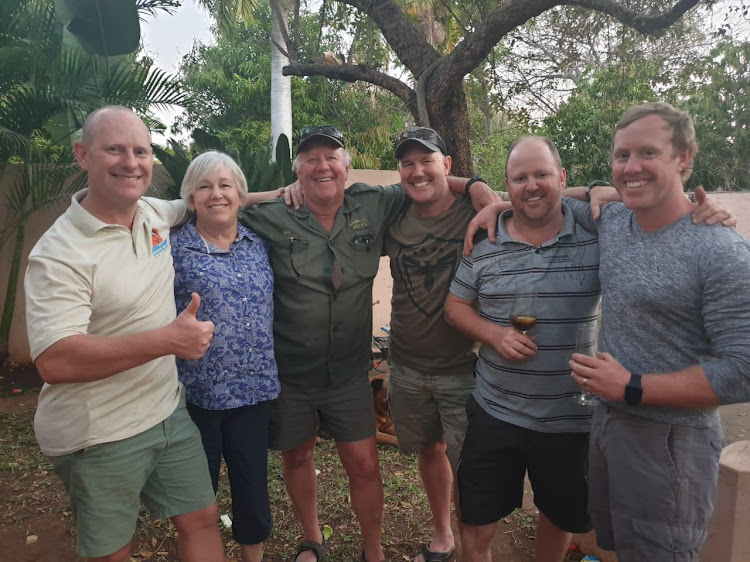 West Mathewson, his wife Gill and their sons.
Image: Supplied by family

The family of Limpopo lodge owner Arthur “West” Mathewson, killed by a lion this week, are saddened but find comfort in knowing he died “while living his dream of being in nature and with his lions that were so close to his heart”.

This is according to family spokesperson Marina Botha.

West was well known in the community for walking his lionesses Demi and Tanner, she said.

“One of them started attacking their owner [Mathewson] without any warning,” during their regular walk on Wednesday.

His wife, Gill Mathewson, witnessed the incident from the vehicle where she was driving behind West and the lionesses.

“She tried her best to rescue her husband, but was unable to do so.”

According to Gill, Mathewson was always “very careful” when interacting with the lions and took all safety measures that he could.

“He loved them with his heart and his soul and though he was always aware that they remained wild animals, he raised and cared for them to the best of his ability.”

The lions have since been moved to a temporary facility.

“The lionesses will at all times be taken care of and the family is devoted to make sure that they will be released into the best environment available to them.”

Adorable lion cubs spotted at MalaMala Game Reserve got more than they bargained for when one cute kitty discovered that the fallen tree they were ...
Lifestyle
1 year ago

An activist group has warned that lions remain wild animals and should always be treated with respect, with no human interaction.

“Blood Lions does not support the interaction of humans with wild animals. There is no need to do that and holds no conservation value,” said Nicola Gerrard, of the Blood Lions campaign.

“While these lions were domesticated from a young age, they are still extremely dangerous and have a wild instinct.

“The conservation community will tell you that it is not advisable to be interacting with wild animals in captivity.”

In 2017, Justice Cebekhulu‚ 46‚ and a colleague were cutting wood near the Lion Treetop Lodge‚ when two white lions escaped from their enclosure. He was attacked when he ran away.

At the time, Mathewson said the attack was the first of its kind in two years of walking tours.

“We are devastated by what has happened‚” Mathewson said.

He said that‚ in his opinion‚ Cebekhulu was not mauled.

“Justice‚ who I believe only had minor injures‚ was airlifted to hospital where my business partner visited him every day until Saturday. When he was seen on Saturday he was sitting up and chatting.”

But when his partner returned to the hospital on Monday‚ he was told that Cebekhulu had died.

“We were told that he died from natural causes and not from his injuries.”

Gerrard said there were more than 200 predator breeding farms in SA and their campaign’s goal is to bring an end to canned hunting and the exploitative breeding of lions and other predators on farms across the country.

A Limpopo game lodge worker has died after he was attacked by lions who escaped from a neighbouring reserve. Justice Cebekhulu‚ 46‚ and a colleague ...
News
4 years ago