The farming community of Normandien, near Newcastle in northern KwaZulu-Natal, raised concerns about farm murders with police minister Bheki Cele on Wednesday.

Cele had been in the area to visit the family of double murder victims Glen Rafferty and his wife Vida. They were shot dead on the front porch of their farmhouse at the weekend. Their dog was also shot dead.

During the meeting, farmers aired their frustrations with the police, who they said had failed to respond effectively when incidents occurred on farms in the area.

One farmer highlighted that he had called for police assistance on one occasion, only to have members in the area respond a day after his initial call.

The lack of police capacity, as well as proper vehicles to drive on farm roads, were also highlighted as a concern.

Local farmer Darrel Brown said there had been a number of farm attacks in the area over the past four years. He said the community had been left reeling after the brutal murder of Rafferty and his wife.

“My parents were involved in a similar attack in 2016 and that particular crime is still unsolved. They fortunately were a positive statistic and lived to tell the tale,” said Brown, before listing a number of other attacks that had occurred in the area.

“It is something that is on the increase in the area, and it is something that we as a farming community have taken initiatives, at great expense to ourselves, to try to curb ... by investing in a camera system that is monitored by a private security company.”

He said farmers were forking out huge amounts of money to private security companies that specialise in farms.

“I knew him from the time I was young. In 1996 we were together at the same church. He would support us with his vehicle, putting [in] diesel and helping us. He was a good man,” he said.

Meanwhile Cele revealed that the police had leads in the senseless killing of the elderly couple. 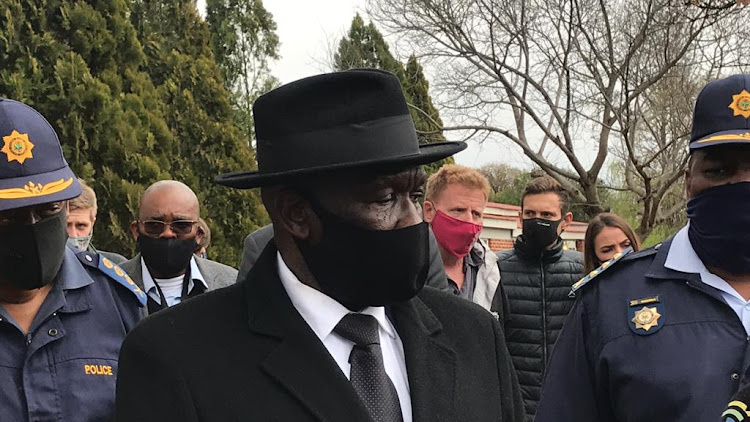 Addressing the media shortly after visiting the Rafferty family, Cele said the police would leave no stone unturned.

“I'm comfortable with the report I received from the head of the investigations here. We have some leads. I hope it is not going to take too long [to make an arrest]," he said.

Cele said there had been about seven incidents of murder or robbery in the area since last year.

“It looks like we have made good progress in arresting those culprits. The only case where we haven't arrested anybody is this case which is new, but it looks like we are going in the right direction.”

Family spokesperson Sandy Hill said they were comforted by the minister's visit as well as the police's efforts so far.

“You only see negative things about farm murders and politicians and everything else on TV. This is an experience I don't wish on anybody, but our experience has been very positive. The police have been amazing. The minister has really impressed me, he's such a nice person — he's been comforting,” she said.

Hill added that the entire ordeal had taken a heavy toll on the family, especially Glen and Vida's two sons.

The police initially said they were alerted about the double murder at 6am on Sunday.

“It is alleged that a 63-year-old man and his 60-year-old wife were fatally shot by unknown suspects while at a farm in Normandien. Their dog was also shot dead. The suspects ransacked the house, cameras were destroyed and a camera control was taken,” said spokesperson Capt Nqobile Gwala.

She added that the perpetrators had fled with the victim’s vehicle.

“The vehicle was later found abandoned at Elandslaagte area.”

Deputy agriculture minister Mcebisi Skwatsha has rejected DA criticism that the government does not care about the plight of white farmers.
Politics
1 year ago