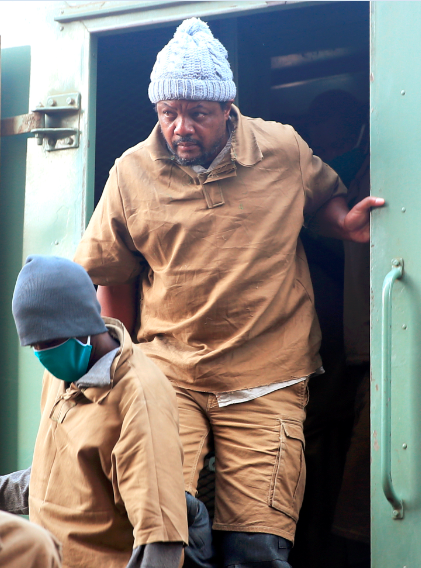 The commission said on Friday that though it welcomed the release of investigative journalist Hopewell Chin’ono from detention, it remained apprehensive.

Chin’ono was arrested on July 20 at his home in Harare ahead of anti-corruption and anti-graft protests on July 31.

The commission noted calls by the Zimbabwe Human Rights Commission (ZHRC) to highlight the importance of respecting and fulfilling the right to life, freedom from torture, inhuman and degrading treatment, and the right to a fair trial.

The SAHRC said human rights violations had implications for neighbouring countries such as SA.

“While these alleged human rights violations are taking place in Zimbabwe, the SAHRC wishes to underline that human rights know no borders.

“It has been reported that through its agencies such as the police, the government of Zimbabwe has been targeting critics from political and civic formations, such as the arrest and detention of investigative journalist Hopewell Chin’ono, author Tsitsi Dangarembga and others.

In the run-up to the July 31 anti-corruption protests in Zimbabwe, I became better acquainted with novelist, playwright, filmmaker and human rights ...
Opinion & Analysis
1 year ago

“It is further reported that the government appears to have used the Covid-19 lockdown to disproportionately restrict civil and political rights such as the freedoms of assembly, speech, petition and protest. All these restrictions appear to be designed to suppress dissent.”

An example, the SAHRC said, was when the UN High Commissioner for Human Rights raised concerns on July 24 that Zimbabwean authorities may be using the pandemic as a pretext to clamp down on freedom of expression and freedom of peaceful assembly and association.

“Reports also suggest there have been instances of disappearances, torture and other cruel, inhuman and degrading treatment of those arrested and deprived of their liberty. The SAHRC urges the government of Zimbabwe to respect customary international law, international and regional human rights treaties to which it is a state party, and specifically to ensure no-one is subjected to torture and other cruel, inhuman or degrading treatment or punishment.”

The commission said the African Charter on Human and Peoples’ Rights required states to protect the rights of individuals irrespective of their political affiliation.

“After the absolute prohibition of torture in international law, the charter further prohibits all forms of torture and other cruel, inhuman or degrading treatment or punishment. As a member of the African Union, the Republic of Zimbabwe must promote and protect human rights within its territory.

“The SAHRC urges the government of Zimbabwe and its relevant officials to treat those arrested and detained humanely and ensure access to basic rights and, particularly, Covid-19 precautionary measures. Those who have been arrested for allegedly committing any offences must still benefit from the presumption of innocence and be subject to the rule of law.”

'There is widespread concern as to where Zimbabwe is headed': US ambassador

The statement commended the appointment of special envoys by President Cyril Ramaphosa to Zimbabwe, but said more needed to be done.

The SAHRC also called on the African Union (AU) and the SA Development Community (Sadc) to ensure Zimbabwe complied with its human rights obligations.

“This is a test for the commitment of the Sadc and AU to fundamental human rights.”

Lawyer Doug Coltart said about eight state agents broke a glass door to gain entry to Chin'ono's house on the day of his arrest. His crime was calling on the public to protest against the country's weak economy and government corruption. He was charged with inciting public violence, an allegation he denied.

He was released on Wednesday hours after the leader of the opposition Transform Zimbabwe party, Jacob Ngarivhume, was granted bail. The pair were arrested on the same day.

Zimbabwe President Emmerson Mnangagwa says he is not bothered one bit by social media onslaughts.
News
1 year ago

Editors' forum concerned at increase in arrests of journalists worldwide

The South African National Editors' Forum (Sanef) has expressed concern that 2020 has become a dark year for media freedom around the world.
News
1 year ago

Zimbabwe's government is moving ahead with plans to criminalise political parties and the media for what it calls campaigning against the state.
News
1 year ago