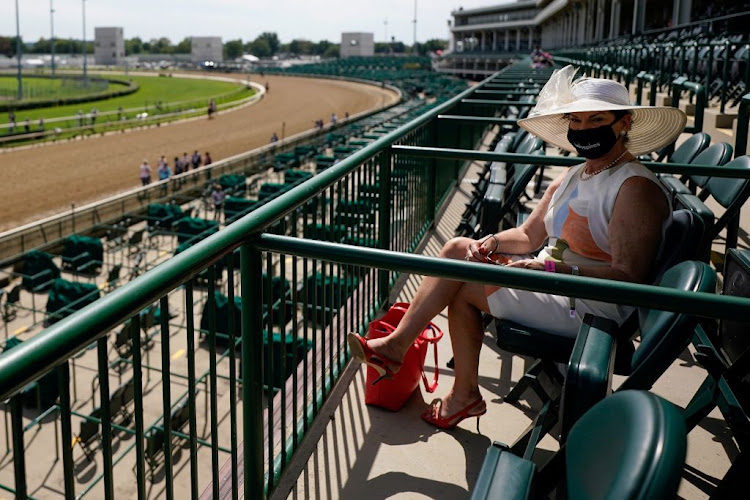 A spectator sits in the grandstand at Churchill Downs a day before the running of the 146th Kentucky Derby, amid the outbreak of Covid-19, in Louisville, Kentucky, US, on September 4 2020.
Image: REUTERS/Bryan Woolston

A cumulative total of 636,884 confirmed Covid-19 cases have been recorded with 1 806 new cases identified.

France must stay vigilant as more people will be hospitalised in intensive care units in the next two weeks, reflecting a flare-up in Covid-19 infections in recent days, health minister Olivier Veran said on Saturday.

Veran however ruled out the need for a new nationwide lockdown, telling BFM television that France had other means to fight the virus, including testing.

"I cannot envision a general lockdown. The lockdown was a lid on an overflowing cooking pot," he said.

Health authorities on Friday reported 8,975 new confirmed cases, almost 1,500 higher than the previous daily peak of 7,578 on March 31, when France was in one of Europe's strictest coronavirus lockdowns.

The death toll in France stood at 30,686 people as of Friday.

As the rise in infections has mainly affected young people, who are less likely to develop complications, there has so far been less strain on French hospitals, which were almost overwhelmed at the end of March.

But after falling steadily for months after an April 14 peak of 32,292, the number of people hospitalised was up by 28 on Friday to 4,671, rising for a sixth day in a row.

Slovakia on Saturday reported a spike of 226 cases of the new coronavirus, the biggest one-day rise in the central European country since the start of the pandemic.

The jump comes as neighbours in the region have also seen record rises in virus cases after the summer holidays and as students return to school.

Officials are seeking to avoid large-scale lockdowns similar to those seen at the start of the outbreak, which hammered economic activity.

Iran schools re-open despite concerns over spread of coronavirus

Schools in Iran re-opened to 15-million students on Saturday after a seven-month closure despite concerns over increased spread of the novel coronavirus in the country.

“This year, we shoulder a heavier burden of responsibility toward our students,” said President Hassan Rouhani, who oversaw the opening of schools in a video conference broadcast live on state television.

Education and health are equally important to society, he said, but added that parents would not be forced to send their children back to school.

Iranian media said that seminaries also reopened on Saturday to about 50,000 students.

Several medical professionals have voiced concerns over the reopening of schools and universities in Iran, one of the countries worst-hit by the coronavirus pandemic in the Middle East.

Dr. Mohammad Reza Zafarghandi, the government-appointed head of Iran's Medical Council, said in a letter to the education minister that the "surprise decision to reopen schools would no doubt lead to an increased burden" on the country’s medical workers.

Russia reported 5,205 new coronavirus cases on Saturday, pushing its national tally to 1,020,310, the fourth largest in the world.

Authorities said 110 people had died in the last 24 hours, bringing the official death toll to 17,759.

India's total coronavirus cases surged beyond 4-million with a record rise on Saturday, making it the third country in the world to surpass that mark, following the US and Brazil.

India added 86,432 cases of the new virus on Saturday, a global daily record, according to data from the federal health ministry.

Infections rose across the country, including in the capital New Delhi and the large states of Maharashtra and Karnataka.

The jump to more than 4-million cases comes only 13 days after India reached 3-million cases, accelerating sharply from the more than 100 days it took to increase by the previous 1-million.

India has logged the world's largest daily coronavirus caseload for almost a month, as its government pushes the opening up of businesses to revive a sharply contracting economy.

Protesters against a Covid-19 lockdown defied police in Australia's hotspot on Saturday, prompting 15 arrests, even as the state of Victoria continued its gradual improvement in stemming new cases due to the nearly five weeks of restrictions.

Around 200 protesters in the state capital Melbourne rallied with chants of "freedom" and "human rights matter", surrounded by swarms of police.

One of the arrests was for assaulting police, while others were arrested or fined for breaching health restrictions, Victoria police said in a statement.

The total infections rose to 21,010, with 333 deaths, according to the data published by the Korea Centers for Disease Control and Prevention on Saturday.

Friday's new cases were the lowest since a major outbreak emerged from a Christian church whose members attended a large political rally on August 15.

The daily tallies have been hovering below 200 over the past three days after peaking at 441 late last week, a sign that tougher social distancing curbs implemented last Sunday have begun taking effect.

The measures included an unprecedented step of curbing the operation of eateries in the Seoul metropolitan area, where the current spread is concentrated, banning onsite dining after 9pm and limiting coffee and bakery franchises to takeout and delivery all day.

The government on Friday extended the rules until September 13, saying more time is needed for sharper drops in new infections.

More than 26.58-million people have been reported to be infected by the coronavirus globally and 872,903​ have died, according to a Reuters tally.

Infections have been reported in more than 210 countries and territories since the first cases were identified in China in December 2019.

These are the top five countries in terms of Covid-19 cases:

Alexander Zverev feared his tie with Adrian Mannarino may not go ahead on Friday due to Covid-19 protocols but the German secured a 6-7(4) 6-4 6-2 6-2 win in a match delayed almost three hours due to talks between organisers and New York health officials.

The US Open third-round clash was originally scheduled to start at 2.30pm local time on Louis Armstrong Stadium but was pushed back while the United States Tennis Association engaged in “collaborative dialogue” with health officials.

“I was told there is very little chance that we were going to play,” Zverev said courtside after the match. “The New York State called and said he [Mannarino] shouldn’t play.”

The number of confirmed coronavirus cases in Germany increased by 1,378 to 248,997, data from the Robert Koch Institute (RKI) for infectious diseases showed on Saturday.

A young Johannesburg professional was so determined to find a new job that he stood in the street with his CV — and it worked.

Ayanda Mbatha began his new job as a project engineer at Rhochrematics in Midrand at the beginning of the month.

The 26-year-old was another victim of the destruction caused by the Covid-19 pandemic, which effected not only the health of the country, but the financial stability of many of its residents.