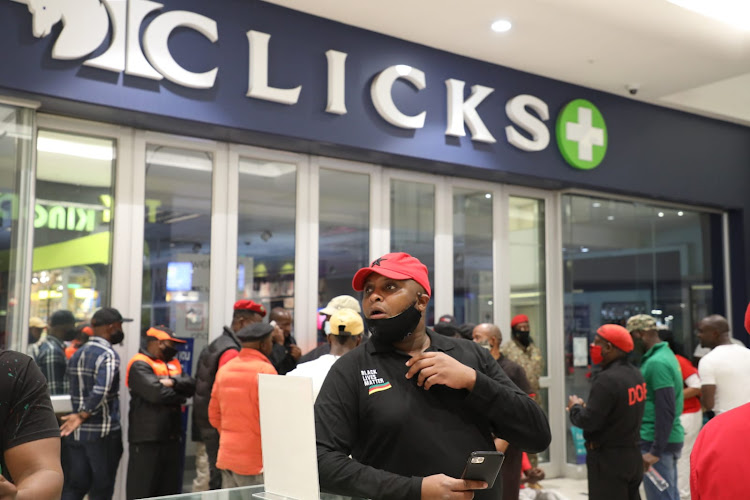 EFF leader Julius Malema says the party will shut down Clicks stores across the country the whole of this week.

Malema led a protest against racism outside the Clicks store at the Mall of the North in Polokwane on Monday morning.

A store at Thornhill Shopping Complex in Polokwane was allegedly petrol-bombed.

There was outrage on Friday at an ad campaign which described a black woman's hair as dull, dry, damaged and frizzy. On the other hand, a white woman's hair was described as “flat and normal”.

Clicks has apologised and removed the advertising. The company said the ad was not its own and was commissioned by the hair company TRESemmé.

“TRESemmé, a brand with which our client has partnered and is a distributor of its products, published an advertisement on our client’s website which depicted the hair of a black woman as being ‘dry, damaged, frizzy and dull’ against that of a white woman, which is described as ‘colour-treated, fine, flat and normal hair'," lawyers for Clicks said in a statement.

The red berets leader  said the party rejected the store's apology and its suggestion to pay an undisclosed amount of money to any charity organisation chosen by the party.

“We shouldn't allow anyone to practise racism. Because Clicks loves money and wanted to make it at our expense, we are going to close Clicks stores in the country for the whole week,” Malema said.

“We will come back here if the management of the Mall of the North don't commit to our demands. We will not accept any apology without justice, we want someone to lose their jobs for insulting black people.”

Addressing members of the EFF, Malema called on Clicks to hold everyone involved in the ad campaign responsible.

“Fire the people responsible for advertising that projected black hair as ugly. The whole of Clicks shops should not open until actions are taken. Every time they insult us, they say they will pay donations to any charity organisation. That is the arrogance of white capital which always wants to buy and throw money on everything,” Malema said.

The firebrand EFF leader arrived in a Black BMW X5 at the mall and was flanked by the party's provincial chairperson Jossey Buthane and national spokesperson Vuyani Pambo.

Buthane and the store management had agreed to release Clicks' workers through the back door. Police were on the scene to monitor the situation.