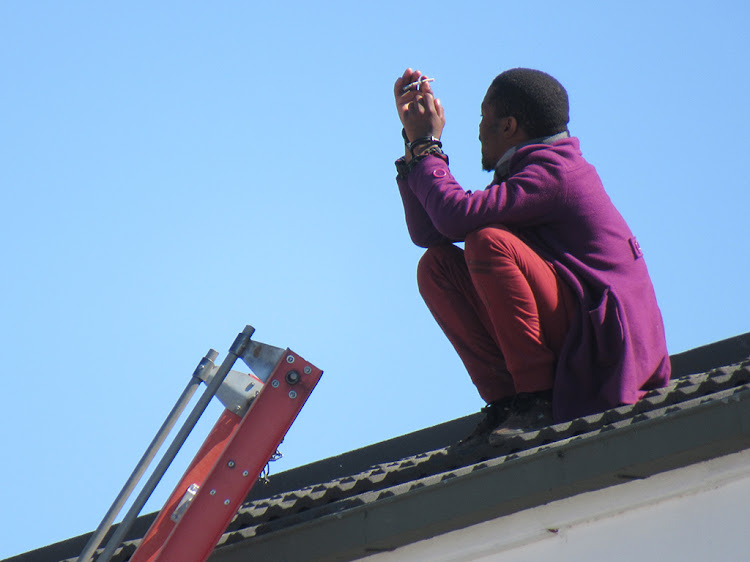 Eastern Cape police saved an escaped detainee after the man threatened to commit suicide by jumping off the top of a building.
Image: ELSABE PIENAAR

A 26-year-old handcuffed man was rescued by Eastern Cape police on Monday morning after he threatened to jump from a rooftop.

The awaiting trial prisoner who was out on bail for robbery, arrived at the department of correctional services, Middelburg, in the Eastern Cape, about 7am to sign his bail conditions.

After officials picked up inconsistencies regarding his residential address, he was prevented from leaving and handcuffed.

A 26-year old handcuffed man was rescued from a rooftop by Eastern Cape police on Monday morning after he threatened to jump from a roof. pic.twitter.com/2gEf5BZ7Vt

After requesting permission to use the toilet, he escaped through a window and used a ladder to gain access to the second floor of the Karoo Country Inn Hotel.

He managed to climb on to the roof and threatened to jump off to commit suicide.

Police began negotiating with him, and a friend was also allowed to approach the building in an attempt to convince him to come down.

He smoked cigarettes that had been handed to him by a policeman who had climbed a fire brigade ladder to talk to him.

After the man threatened to climb on to an air conditioning unit and jump to his death, the police officer again climbed the ladder and eventually convinced the visibly distressed man to leave the roof with him.

According to bystanders, who had engaged him while on the roof, he said he was scared of returning to prison and he would sooner end his life.

A suicidal 26-year old handcuffed man was rescued from a rooftop by Eastern Cape police on Monday morning after he threatened to jump from a roof. pic.twitter.com/5JillOiTO8

This is one of the examples of a flawed government system in which legitimate applicants are told they don't qualify for the R350 Covid-19 social ...
News
10 months ago

A man sentenced to 25 years in jail for money laundering has failed in his bid to be released on parole.
News
9 months ago

Zola Tonga, the taxi driver mastermind of the 2010 murder of Swedish honeymoon bride Anni Dewani, had his parole withdrawn a day before he was due to ...
News
9 months ago