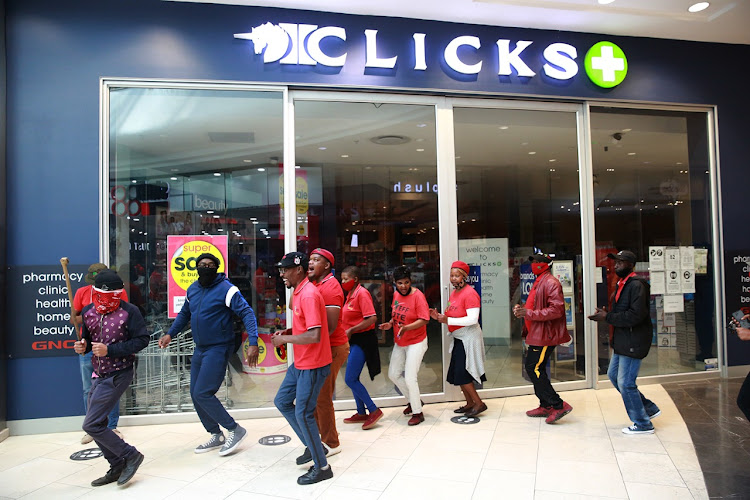 Clicks has told the Ahmed Kathrada Foundation that it will implement various 'proactive' measures to deal with racism.
Image: Thapelo Morebudi/The Sunday Times

That's according to the Ahmed Kathrada Foundation, which on Tuesday met representatives of the health and beauty retailer in the wake of public outrage over a racially offensive advert published on its website.

Clicks stores across the country have been closed, with some vandalised, during protests backed by the EFF.

The meeting was preceded by a letter from the foundation to Clicks.

“The meeting came as a result of a request by the [foundation] on Saturday after news broke of the racially offensive adverts that depicted black hair as 'dry and damaged',  as opposed to that of white hair as being 'flat and normal',” the foundation said in a statement.

Health and beauty retail store, Clicks, which on Wednesday decided to shut the doors of all its stores after two days of protests by the EFF, said it ...
News
1 year ago

Clicks indicated that all employees responsible for enabling the advert to go live had been suspended and that a senior manager had resigned.

“The ... delegation were informed that Clicks would be implementing a number of proactive measures to prevent incidents such as this from recurring,” said the foundation's antiracism manager Busisiwe Nkosi. These include:

“The action steps indicated by Clicks management are positive and need to be made as a public commitment with clear time frames,” said Nkosi.

'Anarchy is not the motive force of transformation': Tito Mboweni on Clicks attacks

Finance minister Tito Mboweni has taken exception to the Clicks shutdown led by the EFF.
Politics
1 year ago

The foundation’s executive director Neeshan Balton said: “While the anger and deep sense of disappointment at Clicks is valid, the tactic of using violence and intimidation to express this anger cannot not be condoned. Our response to issues of racism must not undermine our collective responsibility to uphold the constitution of SA.

The foundation commended the public for ensuring that racism remained a “talking point”, and said it hoped “that the strong condemnation of the advert is translated into meaningful action against racism within the retail and advertising sector as a whole”.

“The foundation will support all action towards eradicating racism and will hold Clicks accountable to the commitments made,” added Balton.

Police have confirmed that the EFF MP who was arrested during protests against Clicks is Kenny Motsamai.
News
1 year ago

It’s simple, stupid. This is how brands like Clicks can avoid blunders

By ensuring their teams are diverse and culturally sensitive, recent blunders by Clicks and KFC could have been avoided.
News
1 year ago