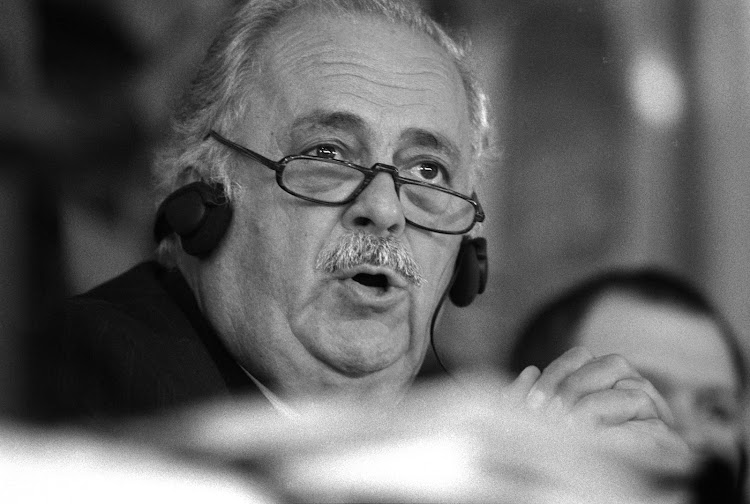 The 92-year-old died from natural causes.

On his Twitter account, Ramaphosa said: “The news of the passing of George Bizos is very sad for us as a country. An incisive legal mind and architect of our constitution, he contributed immensely to our democracy. We extend our deepest condolences to his family and dip our heads in his honour.”

The news of the passing of #GeorgeBizos is very sad for us as a country. An incisive legal mind and architect of our Constitution, he contributed immensely to our democracy. We extend our deepest condolences to his family and dip our heads in his honour. pic.twitter.com/yUCgNuvKDX

The EFF said Bizos left an unforgettable footprint in the fight for human rights in SA.

“Bizos represented a dying breed of leaders of integrity and selfnesses,” said the party.

“He spent his entire life defending human rights and using his legal expertise to fight injustice,” the party added.

The EFF sends its condolences to the family, friends and colleagues of George Bizos.

A giant tree has fallen, one that has been at the centre of our fight against injustice and inhumanity as a country.

May his soul rest in perfect and eternal peace. #RIPGeorgeBizos pic.twitter.com/wzckLrntPH

It further hailed him for continuing to fight for human rights after apartheid had ended, noting his representation of the Legal Resource Centre at the Marikana commission of inquiry which probed the shooting and killing of 44 people during strike-related unrest at Lonmin mine near Rustenburg in 2012.

“His loyalty to the cause of freedom and dignity can never be doubled and his integrity was reaffirmed when he declined judicial and political positions offered to him in the dawn of democracy,” the party added.

“An advocate and champion for human rights, as well as a giant of the struggle for freedom in SA. A life of activism and service well lived. My sincerest condolences to his family,” he said.

UDM leader Bantu Holomisa said he had fond memories of the times he spent with the struggle stalwart.

“George Bizos is no more. My condolences to his family, friends  and Nelson Mandela family. What an innings! From Rivonia trial to Marikana Massacre. I had the privilege of meeting him on a number of occasions. The most privileged ones was when I had lunches with him, Madiba and Nardima. Rest in peace,” Holomisa said.

The Pan African Bar Association of South Africa (Pabasa) said truth, justice and compassion had died along with Bizos, leaving the legal fraternity without a genuine point of reference.

Pabasa said while it would take on Bizos's baton, he had left a void none could fill.

“We owe him and shall pay him by our relentless fight for true freedom and justice for all,” said spokesperson Muzi Sikhakhane SC, who hailed Bizos as a lawyer who was not driven by careerism but by his need to see justice prevail.

“Oom George was a man to whom suffering and persecution were no fiction or subjects for dinner-table ridicule. Having literally risked stormy seas as a child from Greece to come to our shores, his entire life was shaped by his first-hand knowledge of human suffering. He knew exactly what it was like to endure subjugation and systemic persecution. He knew well how to confront the boulders that are always strewn along the way to human emancipation,” Sikhakhane said.

Bizos is survived by his three sons and seven grandchildren.

Human rights advocate George Bizos passed away peacefully at home, attended to by famiy  on Wednesday after a career and life that left an indelible ...
News
1 year ago