The world calls them heroes, but at work SA's doctors are bullied 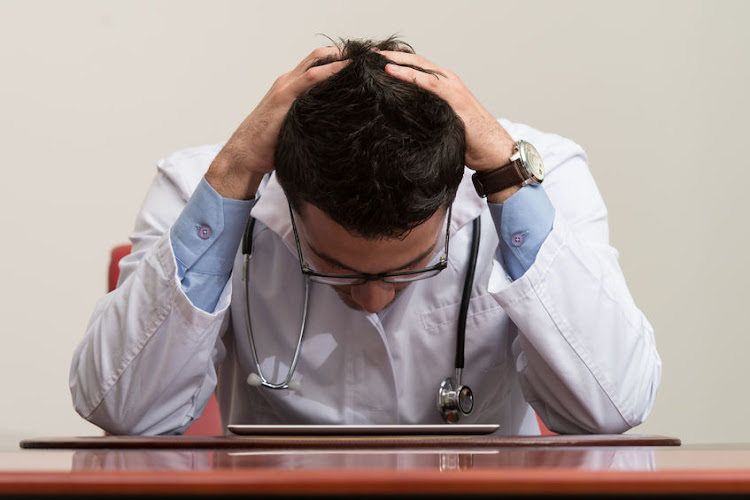 SA's front-line doctors are often under pressure to save lives, but a new documentary has revealed that a toxic workplace characterised by bullying and mistreatment is threatening the future of the health-care industry. File photo.
Image: Jasminko Ibrakovic/123RF

When a young doctor incorrectly diagnosed a patient, a senior doctor who supervised her simply told her that she was stupid and would need prayers to make it through medicine.

“Later on in the same ward round, there was a similar incident where she (the senior doctor) discarded one of my colleague’s notes, drew a line through it and threw the notes on the floor and asked for someone more competent to reclerk the patient,” she said.

“For the ensuing weeks, as though I were a sort of impostor ... I was coming to work for the sake of coming to work, but I didn’t feel like a doctor within the group.”

The female doctor is one of the health-care workers who feature in a new investigative documentary, Behind the Frontline, which exposes the toxic environment that many of the country’s health workers have to endure while saving patients’ lives.

The 20-minute documentary follows a two-year investigation by a Cape Town doctor, Adil Khan, who exposes discrimination, bullying, harassment and mistreatment experienced by some of the country’s front-line workers in the line of duty.

The launch of the documentary on September 30 aims to broaden people’s perceptions of the fragility of the environment in which most of the country’s health-care workers, who had been described as heroes during the Covid-19 pandemic, work.

“Medicine and especially the tertiary, academic system is hierarchical. The effects of bullying and discrimination are definitely felt more by junior staff, personnel in training positions or anyone who doesn't have authority,” said Khan, who is the executive producer of the short film.

He said this mistreatment not only affects health-care workers, who often experienced mental health problems and burnout, but in the long term the health system also suffers from increased absenteeism, spikes in medical errors and the brain drain from the medical sector.

When she tested positive for Covid-19, Durban pilot Fathima Khan Gabie had a mini hospital ward set up in her home, with care from a nurse, doctors ...
News
1 year ago

The documentary looks at how issues such as gender discrimination and racial bias affect the mental health of medical professionals, and the overall implications for SA's health-care system.

It also comes just a few weeks after one of the country’s top medical schools, the University of Cape Town, was embroiled in a sexism saga.

A surgeon allegedly made a reference in a crude e-mail about postgraduate students to the “clinic bitch”. He was apparently referring to staff who rotate between departments providing general clinic duties. The surgeon, who is being investigated by both the hospital and the Western Cape department of health, allegedly said there was no harm meant, defending it as a comment like saying “life’s a bitch” for the person on this roster.

Khan, who described the death of UCT dean of health sciences Prof Bongani Mayosi as a catalyst for the completion of his investigation, which started before his death, said his investigation was inspired by the lived experiences as a public sector doctor.

“I have witnessed first-hand what the effects of a toxic workplace within a health-care setting have on the mental health of workers. I heard many stories of colleagues and friends suffering from discrimination, bullying and mental health challenges. I was inspired to collect these stories and provide a platform to share them with the public to start a conversation about transformation in the profession,” he said.

Patriarchy, together with a repetitive hierarchical system and lack of accountability, were behind the bullying attitudes that had resulted in some bullies feeling emboldened to act with impunity, he said. While medicine was changing from being a prescriptive field where the “doctor knows best” towards patient-centred care, where empowered patients were the key decisionmakers, “some members of the profession have remained behind with the same patriarchal mentality”.

But getting his colleagues to open up was not easy, as many feared reprisal. “Some verbalised fearing for job security or academic suicide if they were seen to be affiliated with this project. Some health-care workers were happy to chat with me behind closed doors but would not allow me to publish their stories in any circumstances,” said Khan.

“The few that I managed to persuade to share their stories on film did so with the knowledge that the stories are told devoid of any personal identifiers and that the tone of the documentary is not sensationalist or accusatory. It rather seeks to explore these pervasive, persistent issues in the health profession and begin a mature discourse towards transformation.”

A doctor in Johannesburg has started a conversation about how medical professionals often struggle with mental illness.
News
4 years ago