'These people are killing our business': hijackers target trucking industry 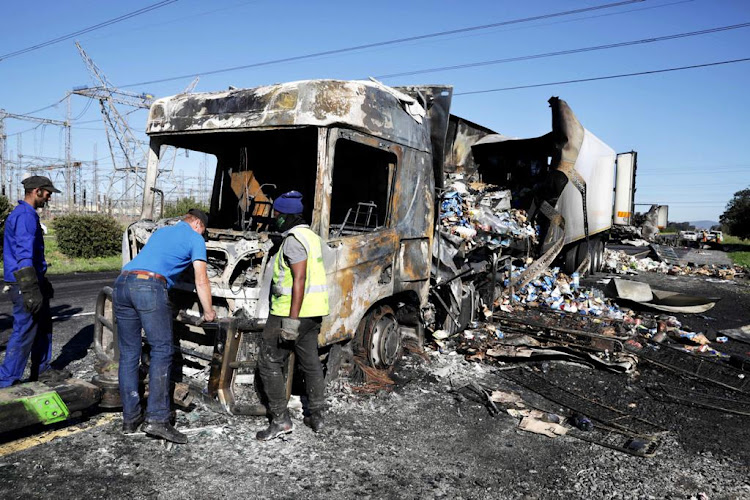 Cargo theft and truck hijacking continues to be a major threat for fleet operators in South Africa, with over 1,000 trucks hijacked in the past financial year.
Image: Esa Alexander

Truck hijackings and cargo theft continue to plague fleet operators, with more than 1,000 vehicles targeted in the past financial year across SA.

Police minister Bheki Cele, while presenting the annual crime statistics recently, said there were 1,202 truck hijackings recorded between April 2019 and March 2020. This indicated a 1.7% increase from the year before.

Canterbury CPT Transport has suffered significant losses in the past week alone at the hands of brazen criminals.

“One of our trucks full of food was hijacked and two other trucks were robbed,” said company spokesperson Massimo Borgia.

Borgia explained how one of his trucks stopped at a toll plaza on the N3 between Johannesburg and Durban while the driver relieved himself. Upon returning to the truck he was escorted away by unknown men and robbed of his entire load.

The wife of a Zimbabwean truck driver who suffered serious burn injuries in an arson attack in KwaZulu-Natal last year and later died, says she is ...
News
1 year ago

Another truck was targeted last week towards Tzaneen, Limpopo, he said. Again the load was stolen.

And in the third case, one of Borgia's vehicles was hijacked at Heidelberg, south of Joburg. The driver had taken a short break when men forced him out of the truck and robbed off his cellphone.

“These incidents have set us back hugely. I understand the poverty [in SA], but these robberies are also stealing from other people as well.”

Cele suggested during the stats presentation that the truck-related crimes were also fuelled by a "labour problem" pointing to friction over the employment of foreign drivers.

Cele explained the trend: “The argument is that the job is given to foreign nationals. Is it wrong to have jobs with foreign nationals? No, it is not. But there are measures that are supposed to be followed.”

“Our members lose goods. They have vehicles damaged. They have drivers threatened. They incur financial losses on top of Covid-19 losses. Their premiums increase and their drivers become reluctant to drive unsafe routes or times,” said Kelly.

“There is a continual drain on their ability to earn revenue and they continue to operate in a continual state of fear and uncertainty.”

He said tensions within the trucking industry flared up during July, when there were calls for protests across the country, with several roads being barricaded and trucks burnt or hijacked.

The industry has been marred by violence and vandalism as organisations, said to be representing the interests of South African truck drivers, demand that the government acts against the employment of foreigners.

Crime stats indicated that truck hijackings had increased in particular in Kempton Park in Gauteng.

The N1 highway out of Cape Town remained blocked on Wednesday due to ongoing protests.
News
1 year ago

Tuesday kicked off on a sour note for many Durban drivers who had to navigate their way around hundreds of trucks which saw traffic gridlocked ...
News
1 year ago

The police will have "zero tolerance" towards any intimidation of truck drivers and other road users during the national truck shutdown.
News
1 year ago

Johannesburg metro police (JMPD) cleared the M2 highway in Benrose on Tuesday as signs emerged of a planned "shutdown" protest against the employment ...
News
1 year ago