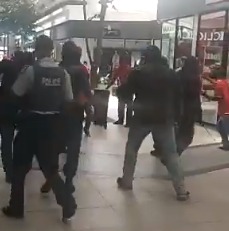 There were chaotic scenes as security guards and police engaged a group of protesters outside Clicks at a Kempton Park mall on Thursday.
Image: Screengrab via Twitter

Gauteng police are investigating a shooting incident that occurred as EFF members and security guards clashed outside a Clicks store in Kempton Park, Gauteng.

The incident occurred on Thursday as EFF members marked a fourth day of protest action against the beauty and health retailer for running an offensive hair advert on its website.

“Police at Norkem Park SAPS responded to an incident at Norkem Corner Mall on Mooi River Road where one of the EFF protesters at the Clicks Store was allegedly assaulted by mall security personnel,” said Brig Mathapelo Peters.

“It is reported that a scuffle broke out between the protesters and mall security as security attempted to get the protesters to leave the mall. Police will investigate the allegations that a shot was fired during the scuffle as per a spent cartridge that was retrieved from the scene,” she added.

No injuries were reported and police did not carry out any arrests.

Health and beauty retailer Clicks has agreed to award five scholarships to black female students to pursue pharmaceutical qualifications in 2021 ...
News
1 year ago

Unilever and EFF agree: TRESemmé products will be back in stores in 10 days' time

Unilever, which supplies TRESemmé products in SA, and the EFF on Thursday reached mutual ground on the future of the hair-care brand.
News
1 year ago