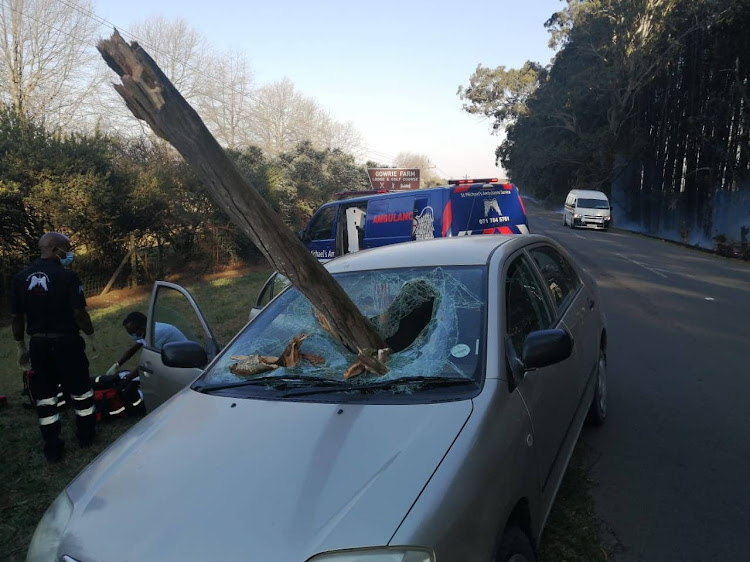 The driver of this vehicle was travelling next to a burning timber plantation when a branch fell from a tree and broke through the windscreen.
Image: supplied

A driver had a close call in the KwaZulu-Natal Midlands on Sunday when a branch fell from a tree and slammed into his car.

The man was fortunate to sustain only minor injuries when a branch from a burning tree smashed into his vehicle's windscreen on the R103 outside Gowrie Village. .

“On arrival, a single vehicle was found at the scene with a tree branch which had penetrated the front windscreen. According to the driver, who was the only occupant, he was driving next to a timber plantation which was on fire. A strong wind was blowing when a branch fell from a burning tree and went through his windscreen. The branch became wedged in the console of the car, between the driver and passenger seats,” Newborn said.

The driver declined transportation to the hospital.

Man's lucky escape as broken down car is crushed by train

A KwaZulu-Natal man is lucky to be alive after he jumped out of his vehicle moments before it was hit by a train, said paramedics.
News
1 year ago

Minor drives car while another child hangs out of vehicle — and one is on top!

A parent from Limpopo who allowed a minor child to drive a vehicle on a public road could find himself in hot water with authorities.
News
1 year ago