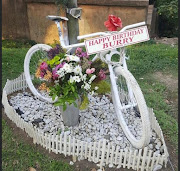 Image: Amanda Stander The mountain bike used by Burry Stander which stood at the crash site for more than seven years has been stolen.

The prized mountain bike that Burry Stander rode in the 2008 Olympics stood at the corner of Stott Street and the R102 in Shelley Beach on the KwaZulu-Natal south coast for more than seven years, to honour his memory and remind motorists to follow the rules of the road.

On Monday morning a new bike was put in its place after the “sentimental piece” was stolen a week ago.

Stander's mother Mandie told TimesLIVE on Monday that she had been to every scrapyard in the area looking for the stolen bike, which was so special to family after the 25-year-old former under-23 world champion was killed when a taxi hit him while he was training in January 2013.

She discovered the bike had been stolen on Thursday.

“I try to avoid going past the memorial because it still hurts, but there are days that I do go by. I went past on Thursday and discovered it was gone.

“We had to replace it with another bike because we had hoped that it would make people think twice before they speed, or turn where they are not supposed to. I wanted it to at least help save one life,” Mandie said.

Nyawose was driving his taxi on Marine Drive in Port Shepstone when the traffic came to a standstill, due to the busy holiday period. He then went over a double barrier line and overtook the stationary vehicles in front of him, while driving in the lane of oncoming traffic. He was turning right when he collided with Stander who was cycling towards him.

At the age of 21, Stander won the UCI Mountain Bike World Cup under-23 men’s cross-country championships in 2009 and partnered Christoph Sauser to win the Absa Cape Epic race in 2011.

He competed in the 2008 Olympic Games and missed a bronze medal by just five seconds in 2012. Stander came third in the Mountain Bike World Championships in Canada in 2010.