Women are sharing their experiences of alleged sexual harassment and abuse at the hands of e-hailing cab drivers in the hope of preventing others from becoming victims.
Image: 123RF/ammentorp

"There is really no precaution you can take against a man who wants to hurt you."

This is the fear voiced by a woman allegedly accosted by an e-hailing cab driver in Pretoria as several South Africans have taken to social media to contribute to a "registry" of drivers they believe should be avoided by female customers.

The registry contains pictures, car registration plates and vehicle descriptions for drivers who have allegedly physically attacked female clients, made sexual advances, picked them up while drunk or made off with clients' belongings.

One of the contributors to this initiative is Karabelo Lelosa. He started a Twitter thread after his girlfriend's experience.

"I joined the initiative because I fear for the women in my life, in my community and all of SA," Lelosa told TimesLIVE.

"Last year my girlfriend called a Bolt cab for me, using her account. When I got into the car, the guy told me he was expecting a woman so he could score a number. I was livid and told him off," Lelosa said.

He expressed concern that while a number of women were coming forward and sharing their stories, there were hardly any repercussions for the perpetrators.

"There is not much being done about abuse and violence by the e-hailing services, so it's up to us to find ways to protect the women in our country. The list I made serves as a database every woman should go through at least once a month to have an idea of which faces, what cars, what colours and number plates to look out for," Lelosa said.

Another contributor to the initiative is Danieta Mailula who, like Lelosa, has compiled a list of drivers against whom accusations have been made.

“My thought was that it would be nice, as women, to have a place we can look up the drivers and cabs before we catch a ride. It doesn’t guarantee 100% safety, but something like that could make a difference,” Mailula told TimesLIVE.

For me, if you can remember or memorise just one face....

She was aware the registry may not be 100% effective.

"Someone was saying how do you memorise all the number plates and faces. For me, if you can remember or memorise just one face..." she said.

Lelosa has faith the initiative would yield positive results.

"I think it will have an effect in the same the way the rape/sexual harassment list had an impact," he said, referring to a thread from 2019 where women named and shamed their abusers.

"Men must be petrified to get on this list because we will blast you so everyone will know you," Lelosa said.

Susan Dey maintained on Friday that she could never "ever" forget the face of the man who raped her on July 6 2016 when she had been picked up by a ...
News
3 years ago 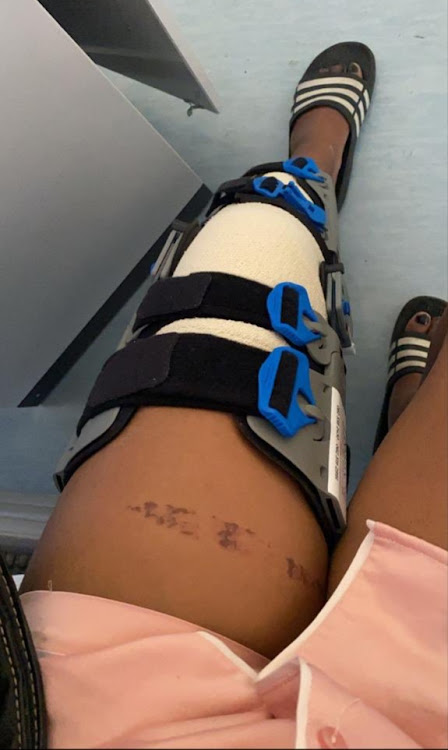 Tlhago Mathibedi had surgery after sustaining injuries when she was allegedly forcefully dragged out of an e-hailing cab by the driver.
Image: Supplied

TimesLIVE spoke to a Pretoria woman who said she had fallen victim to an e-hailing cab driver over the weekend.

Tlhago Mathibedi, 21, said she was dragged out of the vehicle by a disgruntled driver who cracked her knee cap and left her on the side of the road.

Mathibedi has since undergone surgery.

"A friend requested an Uber but we were going to different places. We dropped her off  first," Mathibedi said.

She alleged that trouble started when she questioned the driver about why, after several minutes of driving, they had not exited the estate in which her friend lives.

"I asked him why we were still inside the estate and he started insulting me. I tried calming the situation but he wouldn't have any of it. I didn't know he needed directions to get out of the estate," said Mathibedi.

"He became very aggressive. I recall him getting out of the car, coming to the back seat and dragging me out. I had one shoe on. The other fell and my bag was left inside the car," she said.

Mathibedi said she was on the phone to her sister when the incident happened. Her sister heard the entire incident unfold and came to her rescue.

She now has metal plates inserted into her knee, a cast and brace. She remains fearful and said her use of cab hailing services had come to an end.

I took all the precautions.

Plhago Mathibedi, who was allegedly injured by an Uber driver

"I never thought this would happen to me. I have never had an encounter with a mean or bad driver before.  I reported the driver to Uber and a police station and both said they have launched an investigation," she said.

"I took all the necessary precautions. I was travelling while being tracked by my sister. There is really no precaution you can take against a man who wants to hurt you.

"If you are getting an Uber with a friend, make sure you are dropped at the same place. Or  have family members fetch you from the friend's place," Mathibedi said.

TimesLIVE approached Uber and Bol, the two leading cab e-hailing services in the country, for comment.

e-Hailing taxi service Bolt has suspended a driver after a Johannesburg woman was allegedly assaulted and robbed in Durban.
News
2 years ago

"When drivers are found to be in breach of the Bolt platform terms of use, Bolt engages with them to ascertain whether a mistake has occurred. If an error has occurred, the correct procedures and processes are shared with the driver. If the nature of the misconduct is more serious, Bolt’s response is escalated, and can result in the driver being suspended permanently from the Bolt platform," said Bolt manager Gareth Taylor.

"Any driver implicated in an incident that is being investigated by the police is suspended from the platform until the investigation is complete. Any driver convicted of a crime is removed from the platform permanently.  Bolt proactively supports any police investigations into any incident by sharing any information we possibly can that will lead to the arrest and conviction of a perpetrator," Taylor said.

Uber also indicated it had measures in place.

"If we receive a report that a driver or rider has acted dangerously or inappropriately, we suspend their account, preventing him or her from accessing the platform while we investigate. Rider and driver accounts can be suspended permanently, depending on the outcome of the investigation," the company said.

I created this to make women feel safe and to let them know they can feel safe while being transported.

Meanwhile, a Cape Town teenager has come up with a solution to ensure that women feel safe and comfortable while using cabs.

Asiphe Mkhefa, 18, recently launched an e-hailing service, WomenGo, which operates in Cape Town. It is strictly for women and the drivers are also women.

Soon after the launch, she said she received a threatening message.

“I don't know who sent the threat because it came through an unknown number. The message read that I will never last in the industry,” she said.

Mkhefa said she would not be easily intimidated.

The matric pupil said her business was sparked by disturbing stories shared by women who became victims of crime while using public transport.

“I started it because I was tired of seeing cases of gender-based violence where women were being murdered, I created this to make women feel safe and to let them know they can feel safe while being transported," Mkhefa said.

“People tend to see us as sexist because we have an all women e-hailing service. We are called names for trying to bring change,” she said.

Women are afraid of men - and men are too

So why do we hardly ever talk about it?
Lifestyle
2 years ago

Letaba Technical and Vocational Education and Training (TVET) College student Kgaogelo Shai, who was found dead two weeks after she went missing, was ...
News
1 year ago