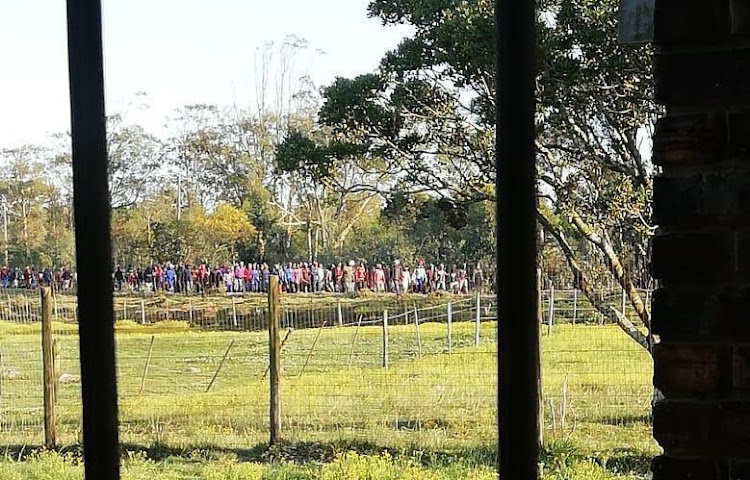 Protesters at the Fairview Racecourse in Port Elizabeth on Thursday morning.
Image: Evan Rothman via Twitter

At least one horse has been slaughtered with pangas and others attacked as a protest allegedly over UIF non-payment rages at the Fairview racecourse in Port Elizabeth on Thursday morning.

Details are sketchy but according to witness Nikki Durrant, who is on the scene, police have made several arrests.

She said a staff dispute at the CCMA was also driving the protest.

“People trying to rescue horses have had their cars pelted with rocks.”

Other reports from witnesses say several horses have injuries including broken legs from trying to flee from fires.

A Fairview spokesperson said the protest began about 6am Thursday morning and that the protesters have since been dispersed. There was no further comment.

Meanwhile, locals on social media say horses have been chased into the bushes.

Meg Wilson, spokesperson for the NSPCA, called the event “mayhem” and said police had asked for backup.

“The scene is still active so we don't have all the details yet. We know at least one horse has been hacked to death and people have been chasing the horses about.

“The necessary action will be taken to prosecute those involved.”

Police have confirmed that 28 horses were let loose from the holding stables at Fairview racecourse by angry protesters.

Six horses have been recovered and brought back to the stables at the racecourse.

Police spokesperson Col Priscilla Naidu said the group of about 150-200 people from a nearby informal settlement descended on the racecourse armed with various weapons.

It is alleged the grooms who worked at the stables had lost their jobs and were unhappy about not receiving UIF payments.

Naidu confirmed one horse had been killed.

The protesters were later dispersed by members of the public order police unit and flying squad members who had reported to the scene.

❗❗Video received of the incident at Fairview Racecourse, reports received that the situation is under control but...

For the past four years the northern KwaZulu-Natal community of Pomeroy has been submitting memorandums and embarking on protest action over the ...
News
1 year ago

Gauteng has a plan to deal with deaths as funeral parlours strike, says MEC

The department of forensic pathology services in Gauteng has partnered with the provincial EMS to help collect the remains of those who die at home ...
News
1 year ago

The EFF's objections have fallen flat at parliament's powers and privileges committee, which has decided to proceed with charging the red berets.
Politics
1 year ago