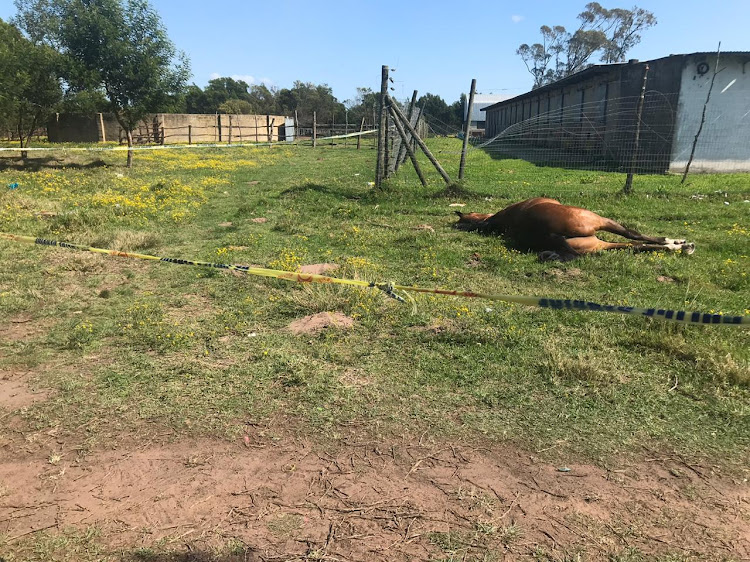 On Thursday morning at around 6am, staff at the Fairview racecourse in Port Elizabeth began a violent protest that culminated in the slaughter of a horse and others being wounded.
Image: Annelisa Swana

Leading owner Hedley McGrath at Fairview Race Yard said on Thursday evening that he wanted to set certain facts straight about a violent protest that ended with the slaughter of a horse and wounding of others in Port Elizabeth.

The International Racing Club had earlier in the day called the incident at the Fairview racecourse a “low day in SA history for horse racing”.

McGrath said the attacks on horses on Thursday were not only caused by one owner’s grooms.

“I would like the owners of all of the race horses that are currently stabled at Fairview with the various trainers to know that it was not just Yvette Bremner’s grooms who took part in the riots this morning, it was also the grooms from the other yards who were part of the attacking and rioting,” he said in a statement.

“The same grooms who are employed to look after their horses were part of this riot. They need to ask themselves, how safe are their horses really?”

According to the International Racing Club, staff who had been fired for the stabbing of a racehorse earlier this year were retaliating against the trainer.

“To all of the detractors who think they are clever by spreading false stories about what happened at Fairview this morning, make sure you check your facts and tell the truth,” said McGrath.

He described the events on Thursday as the “most barbaric”  attacks “I have ever seen and pray to God we never see again”.

The International Racing Club has called the incident at the Fairview racecourse in Port Elizabeth a "low day in SA history for horse racing".
News
1 year ago

The Covid-19 pandemic has brought an unexpected benefit to rhinos and other wildlife - a decrease in poaching during the first half of the year.
News
1 year ago