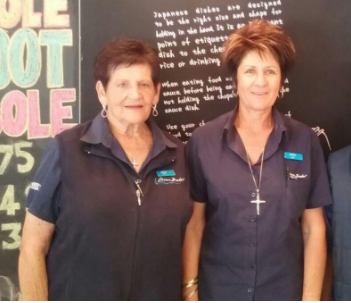 Police in Limpopo made another breakthrough in the murders of businesswoman Lizette Deacon and her mother Hettie when a team of investigators arrested two more suspects on Friday morning.

Police are trying to contact a Zimbabwean, only identified as Owen, as they believe he might be able to assist them in the ongoing investigation. Mojapelo said Owen uses the surname Setsiba, Makutara or Mbedzi.

Lizette owned the Ocean Basket restaurant at the Mall of the North in Limpopo.

On Sunday morning, two suspects aged 30 and 35 were arrested in connection with the brutal murder of the two women, who were killed at their home in Welgelegen, next to Cycad, in Polokwane last Thursday.

'She was more than a boss, she was like family': shock over Ocean Basket owner's murder

Two candles flickered in the Ocean Basket restaurant in the Mall of the North in Polokwane on Friday as distraught staff members tried to understand ...
News
1 year ago

The 35-year-old suspect was arrested in Mookgophong and the second suspect in Polokwane.

The women were allegedly attacked and stabbed  before being tied up and put in the back of their SUV vehicle.

The vehicle was found abandoned next to the R37 between Polokwane and Lebowakgomo on the same night.

The two suspects will appear in the Polokwane magistrate's court on Monday, on charges of murder, house robbery and kidnapping.

The police in Limpopo have made a breakthrough in the murder case of businesswoman Lizette Deacon and her mother Hettie.
News
1 year ago

Limpopo police have confirmed that the owner of the Ocean Basket restaurant in the Mall of the North and her mother were found brutally murdered.
News
1 year ago