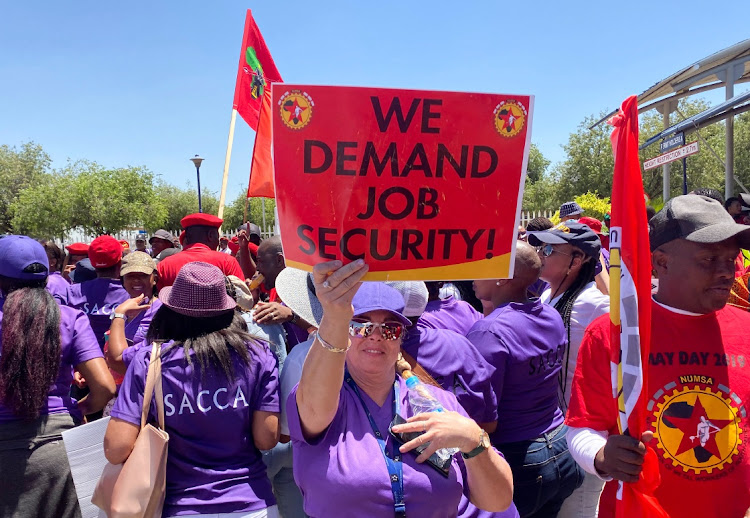 Numsa and the SA Cabin Crew Association want government to account for the failure of the national carrier, SAA.
Image: REUTERS/SIYABONGA SISHI.

Numsa and the SA Cabin Crew Association want to legally challenge the liquidation of the national carrier SAA and SA Express (SAX).

In a joint statement, the unions said they had on Thursday written to the presidency, the department of public enterprises, National Treasury and the speaker of the National Assembly to inform them of their intentions.

“We are challenging government for not giving effect to the law by failing to provide funding for SAA and SAX and for failing to ensure that they are viable and sustainable,” the two unions said.

“SAX is already provisionally liquidated and SAA is faced with an imminent threat of liquidation. Government has a legal obligation to ensure the continued existence and viability of all our state owned companies (SOCs) and in particular SAA and SAX. In our letter we have also reminded all parties concerned that a SOC cannot be placed under liquidation in the absence of parliamentary oversight and assent.”

This move comes after the unions revealed on Thursday that the anticipated funding from the government to rescue SAA had not materialised as had been hoped.

The joint business rescue practitioners for SAA had been awaiting the funding required for the restructuring of the airline and implementation of its business rescue plan, with Thursday the deadline for the expected funding.

The department of public enterprises (DPE) said in a statement on Thursday afternoon that “efforts to locate funding sources continue” and called on creditors and employees to be patient.

The unions  plan to picket at SAA Airways Park in Kempton Park, Ekurhuleni, on Friday.

They blame the government, saying it failed to protect jobs and failed to ensure the competency of senior management and board members it had appointed.

“[Government] failed to take appropriate, if any, action against corrupt and compromised board and executive management members, which only served to expedite the demise of these entities. Workers are paying the highest price for the failures of government through job losses,” the unions said.

The unions have also criticised the government for “a failure to capitalise these entities, which inevitably renders them ultimately financially unsustainable”.

Having served the notices to the affected parties on Thursday, the union said they had until Friday to reply.

“Failure to respond will mean that we will have no choice but to approach the high court and institute the necessary legal proceedings to prevent the liquidation of these entities and to hold government, the executive and parliament to its statutory and constitutional obligations,” the unions said.

Finalising the termination of aircraft leases and securing funding are the two outstanding issues that are critical to the implementation of the SAA ...
Business Times
1 year ago

SAA staff living on a wing and a prayer, devoured by debt

Consumed by debt, surviving on hope and prayers, and having to borrow money or sell valuables to put food on the table. This has been the grim ...
News
1 year ago