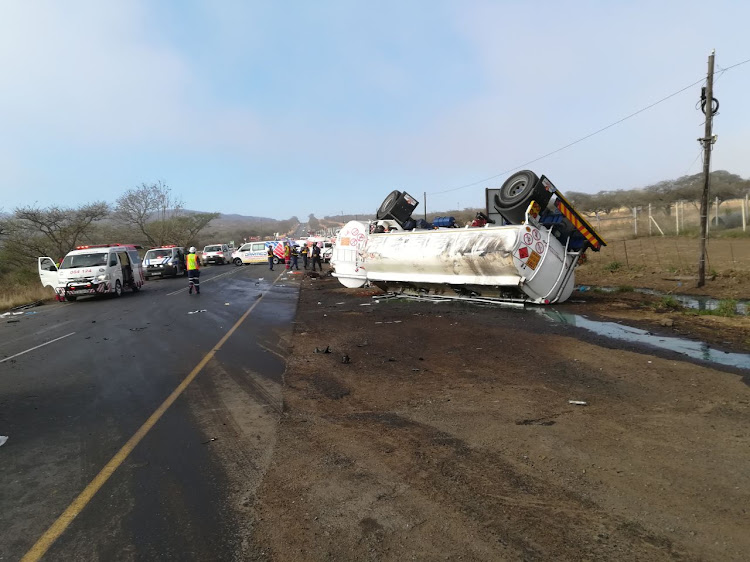 A fatal accident involving a truck and minibus taxi has claimed the lives of 13 people
Image: Netcare 911

A case of culpable homicide is being investigated after a horrific accident between a truck and a minibus taxi claimed the lives of 13 people — including a heavily pregnant woman and her unborn baby — on the R33 near Wartburg outside Pietermaritzburg on Tuesday morning.

KwaZulu-Natal emergency services spokesperson Robert McKenzie said that the scene on the R33 and R614 was still active.

Police spokesperson Col Thembeka Mbele said that police were on the hunt for the truck driver, who allegedly ignored a stop sign and fled the scene after the accident.

“Culpable homicide ... and failing to stop after an accident has been recorded for investigation. Police are still at the scene,” said Mbele.

The road is closed while emergency services clean up the spillage caused by the truck, a tanker, which was carrying petrol and diesel.

ER24's Russel Meiring said that when paramedics got to the scene they found the minibus upright in the middle of the road and the truck on its side on the side of the road. Local authorities closed off the road while medics tended to the patients.

He said several passengers were injured and that two were found trapped in the taxi.

“On assessment, medics found that 13 people had fatal injuries. Nothing could be done for them, and they were declared dead,” said Meiring.

The cause of the accident is unknown.

Three die, 10 injured after truck and taxi collide in Giyani

Three people died after a truck and taxi collided head-on along the D3738 road in Giyani on Sunday afternoon, police said.
News
2 years ago

The driver of a VW Polo vehicle suffered minor to moderate injuries when his car was rear-ended by a minibus taxi and sent crashing through the ...
News
2 years ago