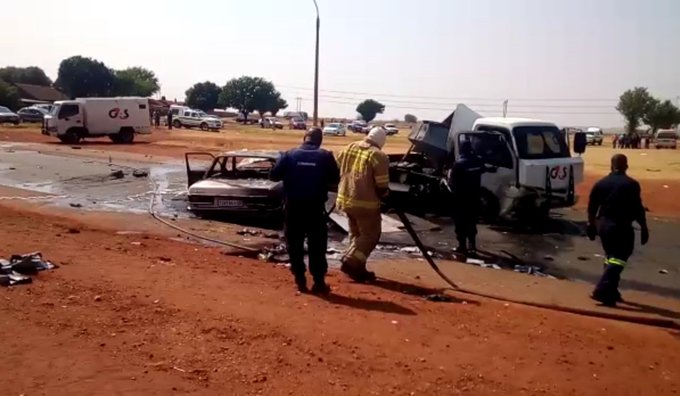 Five alleged cash-in-transit (CIT) robbers were shot dead during a shoot-out with police in Johannesburg on Wednesday. This is the scene of an earlier CIT robbery.
Image: PigSpotter via Twitter

Five members of an alleged cash-in-transit gang have been killed in a shoot-out with police.

The incident took place when police reacted to a cash-in-transit (CIT) heist at Dawn Park near Springs, on the East Rand, on Wednesday morning.

“It is reported that this morning [Wednesday] just after 8.30am, a CIT robbery was committed at Galahad Road in Dawn Park, where an unknown number of suspects robbed security guards of an undisclosed amount of money before fleeing the scene, leaving one of their vehicles ablaze,” said police spokesperson Col Brenda Muridili.

She said the Sedibeng tactical response team and Ekurhuleni swat team followed up on information that led them to a house in Klippoortjie, on Carol Avenue.

“On arrival at the identified safe house a shoot-out ensued between the suspects and the police. Five suspects were fatally wounded while two were arrested,” Muridili said.

Just in | Cash in transit heist in Dawn Park

Police confiscated three vehicles that had been hijacked in separate incidents this year, in Springs, Midrand and Boksburg north.

Four unlicensed firearms and ammunition as well as an undisclosed amount of money were also seized. Some of the money stolen from the robbery was recovered, she said.

In a video posted on social media, members of the public can be seen looting the burning G4S vehicle that was carrying cash.

“With the build-up to the festive season, there will be heightened vigilance and prioritisation of cash-in-transit robberies, especially in Gauteng where it is more prevalent,” said national police spokesperson General Khehla Sitole.

The police have encouraged the public to send tip-offs using the MySAPS App or contact the SAPS Crime Stop number on: ‪08600 10111.

A suspect who was wanted by the Hawks was arrested in Hillbrow, Johannesburg, at the weekend.
News
10 months ago

A manhunt is under way for a group of suspects who attacked a cash-in-transit van on the R38 between Barberton and Badplaas, Mpumalanga, on Friday.
News
10 months ago

Drop in banking crimes, increase in business robberies and burglaries

There has been a decrease in banking related crimes across multiple platforms, the SA Banking Risk Information Centre revealed on Tuesday.
News
1 year ago