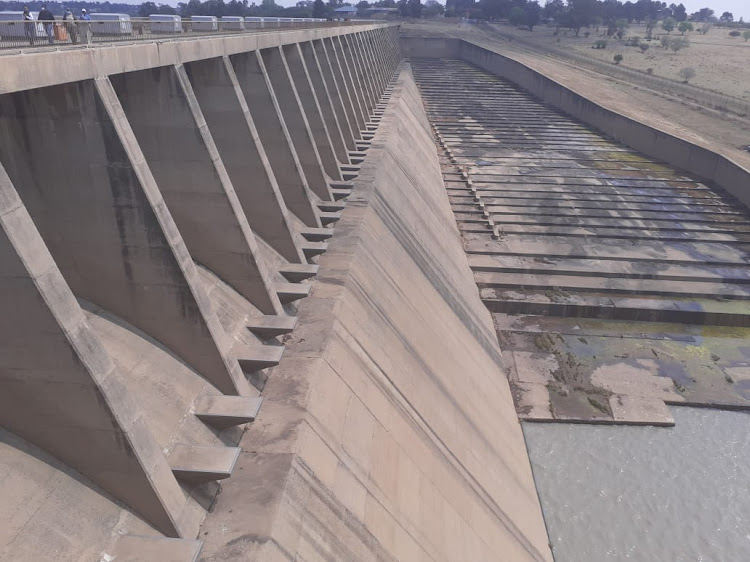 It will take at least 36 months to reduce or stop pollution in the Vaal River system, the department of water and sanitation said at the Vaal Dam on Tuesday.
Image: Shonisani Tshikalange

It will take at least 36 months to reduce or stop the pollution leaking into the Vaal River system.

This is according to Simon Maphangula, director water services at the department of water and sanitation, during a media tour at the Vaal Dam on Tuesday.

But it could take three years to get right, he said.

“We would have addressed the upstream part. The downstream, we would not have addressed it. By downstream we are referring to Mpumalanga, Free State, Northern Cape and certain parts of North West,” said Maphangula.

The department of water and sanitation will not be imposing water restrictions, despite having issued a warning that water levels in the Vaal Dam are ...
News
1 year ago

"We have identified over 26 municipalities who are directly polluting the Vaal River integrated system, but currently the reason we have said we need to start upstream is because, at Emfuleni, that’s where the high concentration of pollution is.

"So the first place is to address the upstream and then it will be followed by the downstream.”

Maphangula said the major challenge that the Vaal Dam faces is pollution.

“That pollution has been a major challenge that has affected both social and economic development of Gauteng. As a result, the department of water and sanitation, through the collaboration of various stakeholders, have agreed to appoint an agent who are specialists in waste water,” he said.

"We did manage to appoint Ekurhuleni Water Care Company. They were appointed for a period of 12 months, starting from June 2019 and their contract expired in July [2020].”

He said they did not renew the contract of the company appointed in 2019 to deal with pollution as they had not moved at the pace the department desired.

“Their primary focus was to make sure that they address and unblock manholes. For us, as a department, we wanted them to fast-track the process of ensuring that they address the main network because the problem is not necessarily the sewer manholes which are overflowing but your networks, which are of course the main cause of pollution at the Vaal.

Dramatic decline in level of Vaal Dam, now under 40%

Gauteng's major water supply dam is at a record low.
News
1 year ago

“We decided not to renew the contract simply because the pace at which they were moving wasn’t desirable and the main networks remain untouched, meaning that the sewer which was our main headache at the time that we had appointed them was still there when their contract ended in July.”

This means that the second phase of the project - which is intended to address the pollution of the Vaal - would be executed by the department internally, he said.

“The intention of the programme is to build the internal capacity of the department, so that we have the required expertise in the form of engineers, so that we have people who are able to assist us in addressing the sewer networks on time. Thus far we are currently ensuring that we run with that project internally,” said Maphangula.

TimesLIVE visited the depleted Vaal Dam on Tuesday, which is now below 40% of its capacity.

The Integrated Vaal River System consists of 14 dams, including the Vaal, and is vital for supplying water to industries in Gauteng, including Sasol and Eskom.

Maphangula said they are not in a position to name and shame individual polluters, but could only categorise them.

No need for water restrictions - yet

Celiwe Ntuli, a scientific manager at department of water and sanitation, said the department would not be imposing water restrictions despite issuing a warning that water levels in the Vaal Dam were on the decline.

However, the capacity of the dam was not looked at in isolation.

“Last year at this time we were at 65% [across the Vaal River system] and this week we are sitting at 59.1%. This was the reading taken on September 14,” said Ntuli.

“The Vaal Dam was sitting at 57.6% last year and this week its currently sitting at 36%.

“So for the mere fact of the interconnectedness of the system, we don’t merely look at Vaal Dam alone. We look at the other dams.”

Ntuli said that if the need arose they will open up the Sterkfontein Dam, which would feed into the Vaal.

“Sterkfontein Dam is our reserve for the Vaal Dam, so it is sitting mainly full most of the time. It is now at 94% and also the dams from Lesotho contribute to the Vaal River system,” she said.

“The system can drop below 60% ... It doesn’t mean that now just because we are below 60% we have to impose restrictions. We just have to be cautious in using our water and use it efficiently and effectively. So at this stage, there are no water restrictions in the Vaal River system. If there is a need, our reserve in Sterkfontein can release water.”

“Access to clean water is a human right. It is untenable that we still have villages, urban communities and farming communities without access to ...
News
1 year ago

Toxins in water produced by cyanobacteria killed more than 300 elephants in Botswana this year, officials have said.
Lifestyle
1 year ago