Six people are now in custody, with a KZN businessman still 'unaccounted for' 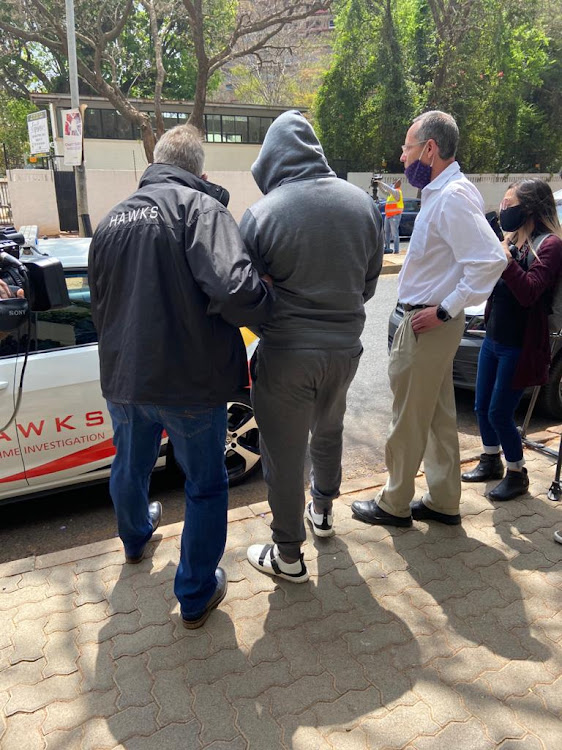 The Hawks have arrested six of the seven alleged masterminds behind a corrupt asbestos deal.
Image: Supplied

The Hawks on Wednesday said they had arrested a sixth person involved in the alleged masterminding of a R200m asbestos audit project in the Free State.

The man, from Gauteng, was on the run as the crime-fighting unit took five people, including three government officials, into custody.

In an update after 2pm, Hawks spokesman Brig Hangwani Mulaudzi said: “We are in communication with the remaining two and have told them to hand themselves over because there is no point in them running.”

While the Gauteng man has been arrested, the seventh suspect has so far still evaded arrest.

"One of the suspects from KZN is still unaccounted for in this case. A warrant of arrest in his name has already been secured," said Mulaudzi.

Those in custody will appear in court in Bloemfontein on Friday.

"Among those arrested are three senior government officials, three businessmen and five companies. The accused face 60 charges which include corruption, fraud, money laundering, contravention of the Prevention and Combating of Corrupt Activities Act (Precca) as well as contravention of the Public Finance Management Act (PFMA)," said Mulaudzi.

TimesLIVE has it on good authority that the man sought in KZN is a recently appointed senior official from the Richards Bay industrial development zone (RBIDZ).

Free State human settlements department head Nthimotse Mokhesi said on Monday that he perhaps should have done more to probe the award of a lucrative ...
Politics
1 year ago

He previously held senior positions at the departments of trade and industry and energy.

The arrests follow a R255m tender the Free State department of human settlements awarded in 2014 to audit and assess households in the province with asbestos roofing.

Outlining the case, Mulaudzi said the contract was awarded "through a procurement process that was done in a fraudulent and corrupt manner".

"In addition, certain public officials received gratification from the contracted company and/or an individual amounting to several counts of corruption. The contract was meant to identify and remove asbestos roofs in the Free State province and failed to conduct due diligence process before participating in the contract," he said.

"It is alleged that the provincial department created an impression that they participated in a contract concluded by the Gauteng human settlement department, while the services were not the same as specified in the existing contract and also the price was higher, in contravention of Treasury regulations.

"During that period the department incurred unauthorised, irregular or fruitless and wasteful expenditure worth over R255m."

The name of former Orlando Pirates and Kaizer Chiefs defender Jimmy Tau was a bone of contention at the state capture inquiry on Wednesday.
Politics
1 year ago

The sole owner of a company employed by a subcontractor to audit and assess houses with asbestos roofs in the Free State in 2014 has testified that ...
Politics
1 year ago

A senior ANC politician is due to be arrested on Thursday by the Investigative Directorate, dubbed the "new Scorpions", on charges of corruption ...
Politics
1 year ago