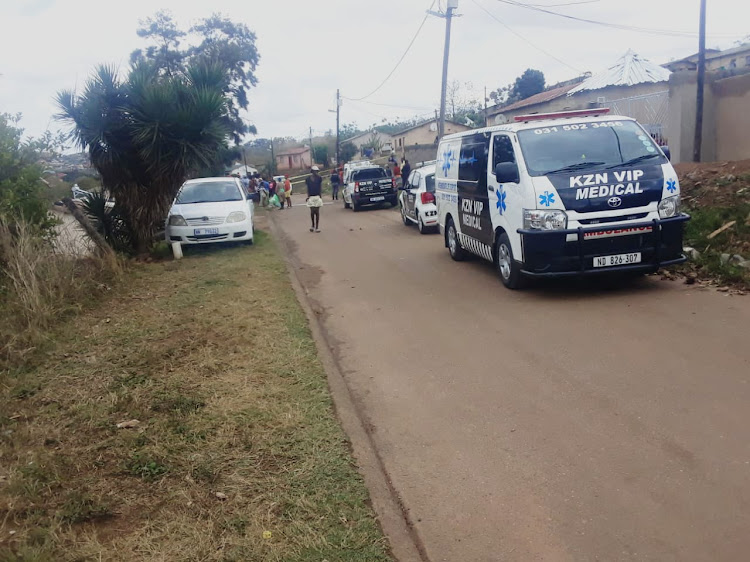 Paramedics found a woman and a child in a pool of blood in Mount Royal, KZN, on Wednesday.
Image: supplied

The South African Police Service K9 Unit was searching the bush around Mount Royal in Durban on Wednesday afternoon for a man who hacked a woman and her two-year-old with a bush knife.

KwaZulu-Natal police spokesman Brig Jay Naicker said the 30-year-old woman succumbed to her injuries and the child was taken to the hospital, where she later died.

"Police in Phoenix were called out to an incident that occurred in the Mount Royal area. It is alleged that a 30-year-old woman and a two-year-child were attacked by a man, who was known to them," he said.

"It is alleged that the suspect hacked them with a bush knife."

Naicker confirmed that a search was under way.

The police K9 unit is searching the bush in the Mount Royal area for a man who hacked a woman and a two-year-old with a bushknife. Brigadier Jay Naicker said the woman and child have died. @TimesLIVE pic.twitter.com/xQAYqjHtWq

Private security company KZN VIP arrived on scene to find the woman and child in a pool of blood.

“This morning at about 10.58am, KZN VIP control centre received multiple calls from members of the public requesting assistance ... They needed medical assistance. KZN VIP was dispatched together with VIP Response and police,” said KZN VIP's Glen Naidoo.

“Upon arrival, medics found two severely injured victims in a pool of blood. The first victim was a female with multiple deep lacerations to both hands and to her head.”

The two-year-old child had multiple large, deep lacerations to her head.

Neighbours said they had heard screams for help before witnessing the attacker, who is known to the community, flee on foot.

The bodies of two women who were killed execution-style have been found by the police in KwaMashu, KwaZulu-Natal.
News
1 year ago