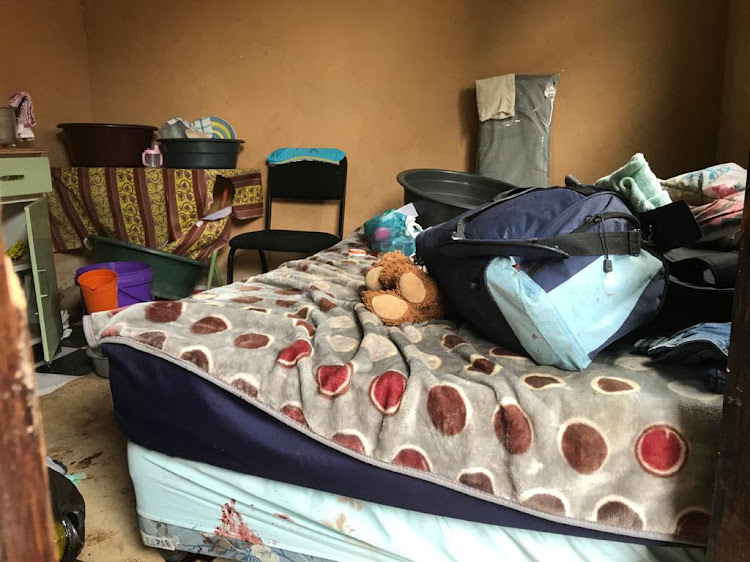 The room in a Phoenix house where a woman and her two-year-old daughter were hacked to death. A 62-year-old man has been arrested in connection with the deaths.
Image: Orrin Singh

A 62-year-old man has been arrested in connection with the gruesome murder of a Phoenix woman and her two-year-old daughter.

The 34-year-old mother and her toddler were found in a pool of blood at a residence on Solly Mathe Road in Mount Royal, north of Durban, on Wednesday.

The police said the woman had been hacked to death with a bush knife by a man who was known to her.

In a statement on Thursday, spokesperson Brig Jay Naicker said the mother's two-year-old child was also injured and died while receiving medical attention.

“A bush knife was found at the scene. The suspect had fled the scene into the nearby thicket before police arrived. Charges of murder were opened for investigation at Phoenix SAPS.”

Neighbours said they had heard screams for help before witnessing the attacker, who is known to the community, flee on foot.
News
8 months ago

Naicker said local police together with the K9 unit conducted a manhunt for the suspect.

“Police worked tirelessly throughout the night searching for the man involved in the gruesome murders.”

He said the man was arrested on Wednesday evening when he made the mistake of revisiting the scene of the heinous crime.

“In the middle of the night, the suspect was spotted sneaking back into the house. He was placed under arrest and was found wearing a bloodied shirt. Police seized his shirt for further investigation.”

Naicker said the victims have not yet been identified by their next-of-kin and therefore cannot be named at this stage.

TimesLIVE understands that the woman and alleged perpetrator were in a romantic relationship.

He is expected to appear before the Verulam magistrate’s court soon.

The bodies of two women who were killed execution-style have been found by the police in KwaMashu, KwaZulu-Natal.
News
8 months ago

The body of a four-year-old girl was discovered with multiple stab wounds in KwaMashu, north of Durban, on Friday.
News
8 months ago