Emotions run high as KZN toddler, 4, is laid to rest after rape and murder 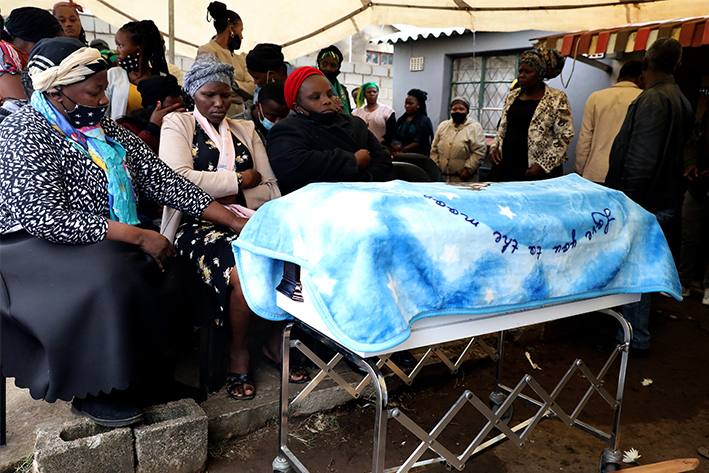 The family of slain toddler Sanelisiwe Mhologo paid their final respects to the four-year-old as she was laid to rest at the Ntuzuma Cemetery, north of Durban, on Friday afternoon.

The toddler was brutally raped and murdered, allegedly by her 15-year-old uncle.

Dozens of family, community members and congregants gathered at the Mhlongo family home in KwaMashu during the service where messages of support were offered by social workers and close family.

Member of the provincial legislature Zinhle Cele, who grew up in the area, said Sanelisiwe's gruesome murder had left the entire community in shock.

“It was devilish, she was ravaged — if I can put it like that.”

The toddler's naked and battered body was found near their home last week Thursday after she was reported missing the day before.

This week police made a breakthrough in their investigation when they arrested the child's 15-year-old uncle.

The boy, who cannot be named due to the rape charge he faces as well as the fact that he is a minor, appeared in the Ntuzuma magistrate's court.

He has since been placed at a place of safety and is expected back in court on Wednesday for a formal bail application.

Double blow for family as boy, 15, held for rape and murder of niece, 4

The family of a slain four-year-old KwaMashu girl is grappling to come to terms with the fact that she was allegedly killed by her 15-year-old uncle, ...
News
8 months ago