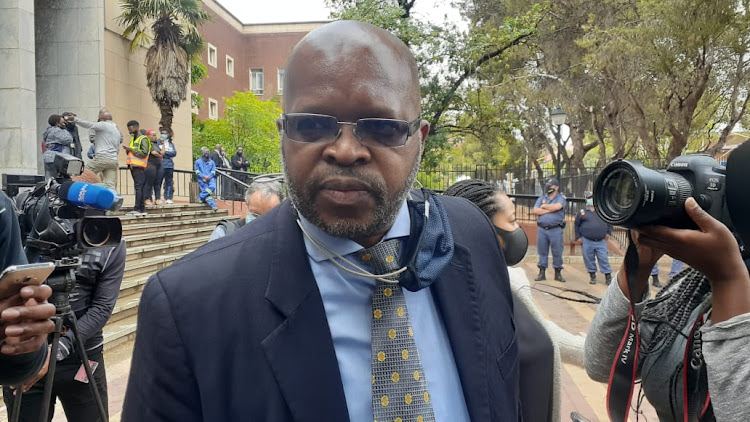 National Prosecuting Authority spokesperson Sipho Ngwema said the high bail amounts granted to the accused in the Free State asbestos tender case are an indication of the seriousness of the charges against the seven suspects.
Image: Thapelo Morebudi

The seven suspects implicated in the R255m asbestos corruption case were all granted bail in the high court in Bloemfontein on Friday.

The state had called for the court to show no mercy to two of the seven people who had said they would not be able to afford the proposed bail of R100,000.

Prosecutor Johan De Nyschen called for the court to consider there were serious charges against the accused, adding that if found guilty, the accused will face minimum sentences of 15 years behind bars.

De Nyschen asked the court to “bear in mind the money involved”, referring to the millions which were meant to pumped into removing asbestos roofing in Free State houses.

“It’s not the state’s problem where the money went,” De Nyschen said, suggesting these monies had been received by the accused.

One of the accused in the R255m asbestos corruption case appearing at the high court in Bloemfontein on Friday may have to face additional charges ...
News
1 year ago

Matlakala, through his lawyer, told the court he could only afford R30,000 bail, saying his personal circumstances had been narrated in an affidavit handed to the court.

The affidavit was not read into the record.

Manyeki also pleaded for leniency. After being quizzed about affordability, he told the court his monthly income was R30,000 and his living expenses were around R15,000.

The highest bail amount of R500,000 was given to businessman Edwin Sodi.

Their case returns to court on November 11.