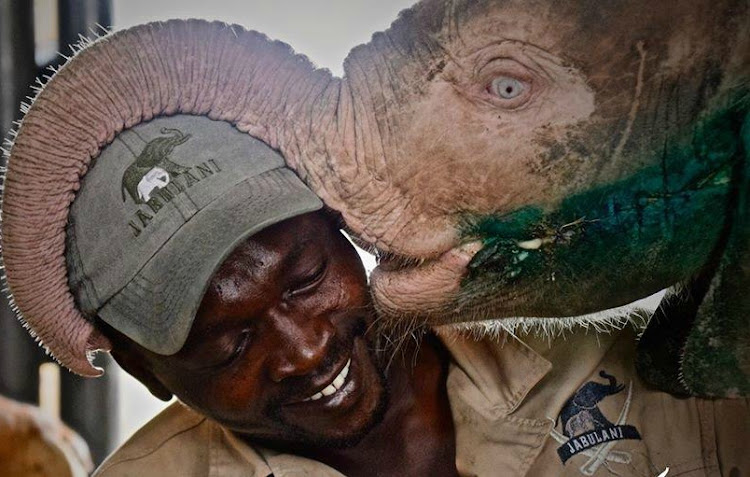 Khanyisa, a resident at Hoedspruit Elephant Rehabilitation and Development in Limpopo, celebrated her first birthday last week
Image: via Facebook

From the US to the UK, Portugal, Poland, Australia, Ireland and India, heartfelt messages from the around the world have poured in for Khanyisa, a rare albino elephant calf that celebrated her first birthday last week.

Khanyisa, meaning "light" in Shona, was moved to Hoedspruit Elephant Rehabilitation and Development (Herd) in Limpopo after she was rescued from a snare with severe injuries in January.

At the time, Herd said her wounds indicated she had been desperately trying to free herself for days.

She had severe lacerations around the back of her ears and neck that stretched around her mouth and cheeks.

She was initially taken to the Care for Wild Rhino Sanctuary in Mpumalanga, where she was stabilised, before a Herd team transferred her to the Limpopo sanctuary.

A rare albino elephant calf is receiving around-the-clock care at SA’s first dedicated elephant orphanage after she was found trapped in a snare with ...
News
2 years ago

The calf settled in with Lammie, Herd's resident companion sheep, for company.

The Herd orphanage is located alongside the Jabulani Elephant Stables for proximity to a close-knit family of elephants, many of them also orphans. 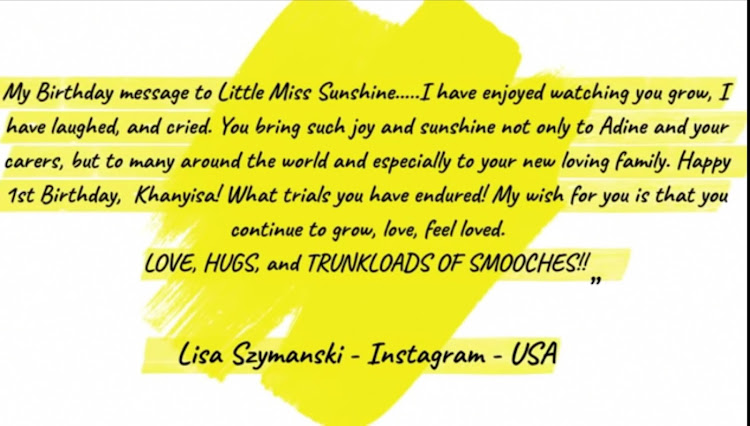 A birthday message to Khanyisa from her US fan Lisa Szymanski.
Image: Supplied

When Khanyisa's wounds had healed, the integration with the Jabulani herd began.

"Khanyisa started joining the herd in the wild for two hours in the mornings, learning from them every step of the way," said Sue Howells from Herd.

"After some time, she started staying a few more hours with them, which meant we had to ensure we took fresh, warm milk to her every two hours.

"Khanyisa turned one on September 26, her birth date estimated by vets. She has come such a long way during the past eight months in our care."

A BIRTHDAY VIDEO WISH FROM THE WORLD 🌍 🎊🐘 💚FULL VIDEO LINK in PROFILE💚 What better way to celebrate such an inspirational day, than by hearing from Khanyisa's global family for her first birthday! 🥰🥰Plus an incredible welcome this morning from her HERD too, that you don't want to miss! PLEASE head to our YouTube to watch the Full Video of Love! LINK IN BIO! 🐘☀️ https://youtu.be/ZaPOPD_rBIQ Let's face it - elephants may not understand the concept of a birthday - but for us, as humans, it represents stepping stones of life, and it's great to celebrate hope, strength, courage and survival! It is hard to think of the horrific snaring ordeal she survived just eight months ago. Just look at her now! A sincere thank you to every person that sent a video, a message, an email! You have been amazing! We may not have been able to include everybody's videos due to the design of the video as we decided to make just one long video for her birthday with everyone's messages. Keep an eye out in Instagram stories for your video if we were unable to include yours ❤️🌸 Thank you for celebrating her life with us. We look forward to seeing her go from strength to strength for the next year to follow too. 💛 From all of us at HERD! Update on our LIVE broadcast tomorrow has changed to early morning Sunday 05:30 AM Africa Time - join us for Khanyisa's 1st milk bottle of the day and a weigh-in! NYC: 23:30 Saturday California: 20:30 Saturday UK: 04:30 Sunday Japan 12:30 Sunday India 09:00 Sunday

Her fans, who regularly watch the young elephant's antics on YouTube, shared messages, cupcakes and home-made cards via video.

Lisa Szymanski from the US said in her birthday message to Khanyisa: "I have enjoyed watching you grow. I have laughed and cried. You bring such joy and sunshine not only to Adine Roode and your carers, but to many around the world."

Howells said the next step in Khanyisa's rehabilitation would be to join the herd overnight when the time is right.

"She is still reliant on us for her milk. She sometimes wakes up hungry during the night so it will be difficult for her carers to access her in the stables," said Howells.

As if poaching and drought aren’t enough, now Zim ellies are threatened by toxins

In just more than a month, 34 elephants have died, with wildlife authorities blaming toxic micro-organisms
World
1 year ago

In a viral video, elephants and giraffes from the Wild Is Life Trust's Zimbabwe Elephant Nursery (ZEN) take part in the dance challenge with staff ...
News
1 year ago

The once-lost Somali sengi, or Somali elephant shrew, has been rediscovered in Djibouti after 50 years.
News
1 year ago