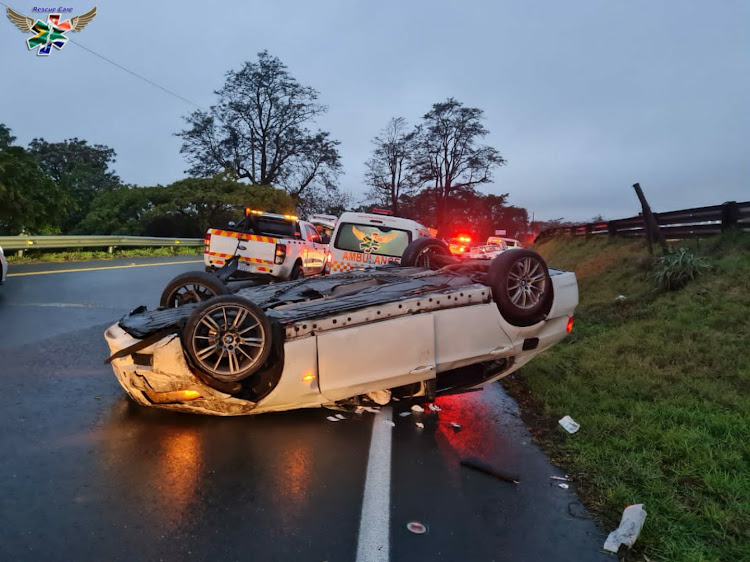 A paramedic was seriously injured while treating a patient at an accident scene when a motorist ploughed into the ambulance.
Image: Supplied

A Durban paramedic, who was treating a patient at the scene of an accident, suffered severe injuries when another motorist lost control and crashed into the ambulance he was working in.

Rescue Care said in a statement that the incident took place on the M13 highway on Friday evening.

“Rescue Care paramedics together with other private ambulance services were on the scene of a single motor vehicle that had overturned on the freeway.

“While the paramedics were assessing one of the occupants in their ambulance,  a vehicle on the westbound carriageway, lost control of his motor vehicle and went through the centre median colliding into the side of the ambulance before coming to rest on its roof,” the ambulance service said in a statement.

The paramedic was seriously injured and had to be stabilised on the scene before being transported to hospital.

“The two occupants from the motor vehicle sustained moderate injuries and were transported to hospital for further treatment.”

Questions over whether a freak accident, which claimed the life of a truck driver, could have been avoided have been raised following chilling ...
News
1 year ago

A truck driver has died in what paramedics described as a freak accident in Pinetown, west of Durban, on Monday night.
News
1 year ago

A motorist died in his Mercedes Benz after colliding head-on with a minibus-taxi in Hammersdale, KwaZulu-Natal, on Friday night.
News
1 year ago