'People were jumping through the windows' 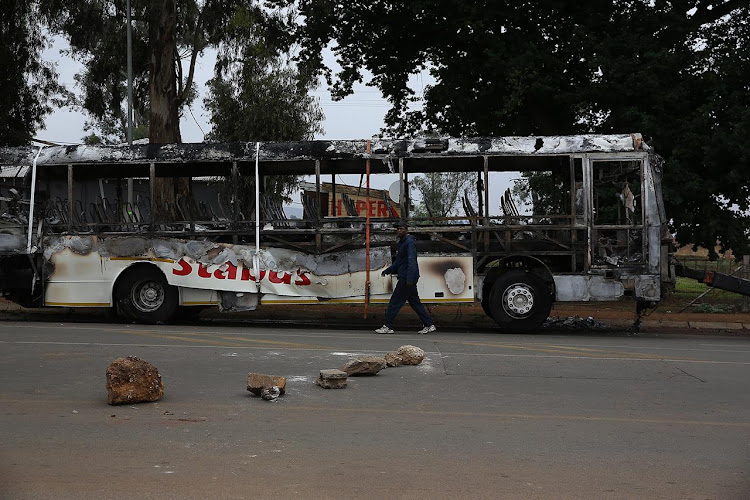 The remains of a burnt bus, shortly before being removed from the scene in Lawley, south of Johannesburg, on October 6 2020. People were screaming and some were jumping through the windows, after the bus was set alight, a witness told TimesLIVE.
Image: ALON SKUY

A bus driver was killed and commuters were seriously injured after an armed gang opened fire and set the bus alight in Lawley, south of Lenasia, Gauteng, on Tuesday morning.

Police spokesperson Brig Mathapelo Peters said the incident happened at around 5am near the Lawley railway station.

“Preliminary investigations reveal that the bus had stopped to pick up commuters when three armed, unknown suspects started firing shots at the bus,” said Peters.

“An unconfirmed number of commuters were injured while attempting to alight from the bus. It is alleged the suspects then hurled a petrol bomb at the bus, which caught fire, and the suspects fled the scene.”

One person was killed near Lawley train station when a bus was set on fire in an alleged route dispute between buses and taxis. Road has been closed so use alternative routes.

City of Johannesburg emergency services spokesperson Nana Radebe confirmed that the bus driver was killed and was burnt beyond recognition.

Radebe said four other people was in a serious but stable condition.

Listen to what happened:

A witness, Prudence Mohai, told TimesLIVE that she drove past the scene and saw the bus well alight.

“I wasn't there when the incident started, but I was passing the scene in a taxi when the bus was on fire,” she said.

Whoever did that is cruel and heartless.

“People were screaming and some were jumping through the windows. The bus burnt to ashes. This is really painful. Whoever did that is cruel and heartless.”

A second witness, who asked not to be named, said she was on her way to work when she saw the bus on fire.

“I was late and when I arrived I saw the bus on fire. I got the shock of my life because you could see that there was someone in the bus,” the woman told TimesLIVE.

“I was scared and ran away.”

The road in the area was lined with rocks and debris. The bus had since been removed from the scene. Peters said the motive for the incident would be investigated.

Cases of murder and malicious damage to property were opened.

Johannesburg metro police officers and the police were out in full force in Lenasia South and Lawley early on Monday to contain protests.
News
1 year ago

WATCH | Shots fired as police and protesters clash over evictions

Communities in the south of Johannesburg took to the streets on Monday morning to voice their frustration about possible evictions in the area.
News
1 year ago

Human settlements minister Lindiwe Sisulu has condemned the evictions of people from informal settlements by the Red Ants in Gauteng, saying the move ...
Politics
2 years ago