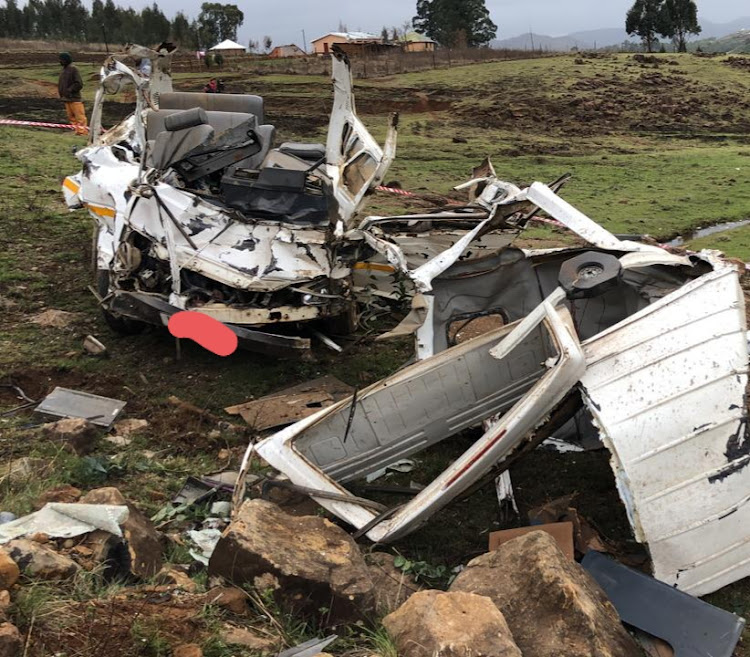 13 people died in a horrific taxi crash on Saturday afternoon when the driver of the vehicle lost control and rolled down an embankment.
Image: KZN EMS Robert McKenzie

The death toll in a horror KwaZulu-Natal taxi crash has risen to 13.

On Saturday night it was reported that 12 people — all from the same family — had died when the driver of a minibus taxi lost control and rolled down an embankment in Kilimon, near Underberg. Four people were taken to hospital.

However, after a visit from KwaZulu-Natal premier Sihle Zikalala and Cogta minister Nkosazana Dlamini-Zuma to the family on Sunday, it was revealed that a 13th person had died.

The MEC and minister — who were accompanied by KwaZulu-Natal community safety MEC Bheki Ntuli and social development MEC Nonhlanhla Khoza — also visited the scene of the crash, where the taxi's mangled wreckage still lay more than 24 hours later.

The KwaZulu-Natal government said it wanted a full investigation into the cause of the accident.

The provincial government's official Twitter page said on Saturday it was believed all those who died in the crash were from the same family. A child was among the victims.

“Our hearts go out to the family who lost their loved ones in this horrific accident. We hope they can find comfort in the Almighty during this difficult time. We also wish those injured a speedy recovery,” said Zikalala.

The crash took place on a rural road, and pictures from the scene showed the taxi’s roof torn off from the impact. Debris was scattered around a rocky field.

KwaZulu-Natal emergency services spokesperson Robert McKenzie said it was a single-vehicle crash. He said that three other occupants were in a serious condition and were treated on the scene by private and government ambulance staff.

Ahead of Zikalala’s visit, the DA in KwaZulu-Natal called for the provincial government to increase its commitment to road safety.

DA MPL and the party’s spokesperson on transport in the province Sharon Hoosen said seven other people died in accidents near Ladysmith on Saturday, including a motorcyclist who was allegedly killed in a hit-and-run incident.

“The DA today calls on KZN transport MEC Bheki Ntuli to urgently commit to the restructuring of the Road Traffic Inspectorate (RTI) in order to increase the presence of law enforcement officers on the province’s roads,” said Hoosen.

“The DA is deeply saddened by this severe loss of life. We extend our sincere condolences to the families of those who have passed away under such tragic circumstances. We also convey our best wishes for a speedy recovery to those who have been injured.”

Port Elizabeth police are investigating a case of reckless and negligent driving after a motorist bizarrely veered off the side of a busy road and ...
News
1 year ago

A 30-year-old man is in a stable condition at Tygerberg Hospital in Cape Town after his car plunged 200m down Bainskloof mountain pass.
News
1 year ago

A bizarre accident in which a Port Elizabeth man and his ex-wife — travelling in separate cars — crashed into each other before careening through the ...
News
1 year ago