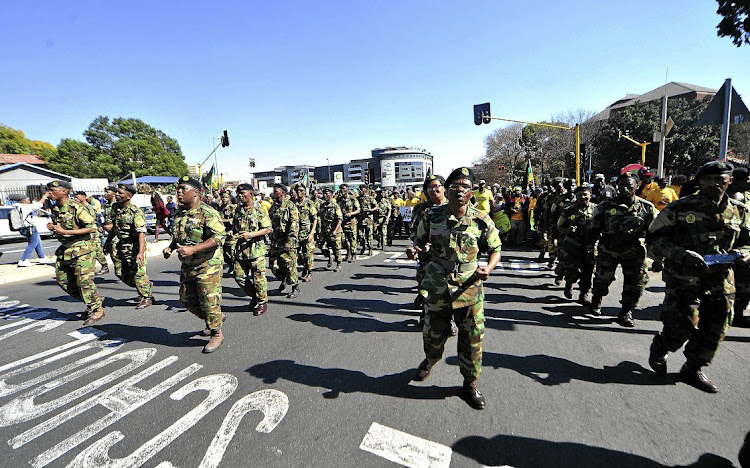 Members of the Umkhonto we Sizwe Military Veterans Association (MKMVA) gathered at the premier's office in Johannesburg to hand over a memorandum of demands. File photo.
Image: Veli Nhlapo

The Gauteng Umkhonto we Sizwe Military Veterans Association (MKMVA) march on Monday hit a snag as they withdrew their memorandum due to the unavailability of the premier.

Thanduxolo Dyodo, MKMVA Johannesburg region secretary, said they would not hand the memorandum of demands to anyone but premier David Makhura.

“We have decided to withdraw the memorandum. We were told the premier is not available to receive it. We want to meet the premier no later than Wednesday.

Those thugs calling themselves Mk .

The group, together with other organisations, marched to the premier's office to raise their grievances on the plight of the poor and forgotten freedom ﬁghters, rampant corruption in the country, and the demand for the arrest of apartheid-era killers.

“Also, the arrest of transport minister [Fikile Mbalula] for the damaged railway network, the plight of truck and taxi drivers, crime and gender-based violence. Overall, the march is in support of the ANC's official economic policy programme for Radical Economic Transformation (RET),” said the MKMVA in a statement.

Just seven of Metrorail's 34 commuter lines are now operating countrywide — and then only with reduced services — as it grapples with large-scale looting by cable thieves.

But it has gone beyond cable theft. Whole stations, such as Jeppe in Johannesburg, have been destroyed. In Cape Town, a settlement in Langa has been built on disused central line tracks that will have to be replaced before the line can be reopened.

#sapsGP About 300 members of Umkhonto WeSizwe Military Veterans Association (MKMVA) have arrived at the Gauteng Premier's Office to handover a memorandum. Members of #SAPS & Johannesburg Metro Police Department are monitoring the march. No violent incidents reported so far. TM pic.twitter.com/4wMBeLlqYe

Prasa has a huge battle ahead to restore commuter services in SA's big metros.
News
1 year ago