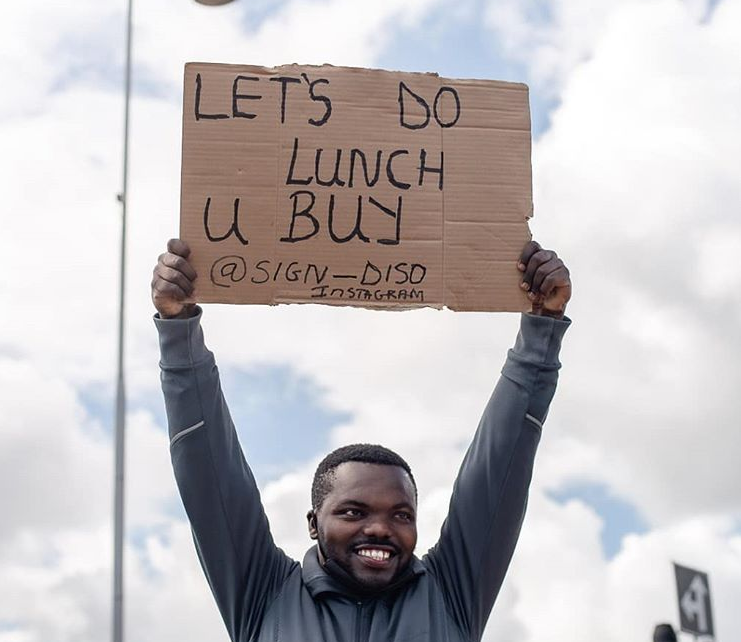 More than R56,000 has been raised for Lusindiso Malgas, who lost his job during the lockdown, leaving him struggling to support himself and his three children.

Malgas, originally from the Eastern Cape, was a warehouse packer until he and others were retrenched.

“At first they reduced our working days and then we received salary cuts. I continued working even though it was hard to survive. Eventually, they told us the company was losing money due to the lockdown and we were let go.” he told TimesLIVE.

Under pressure to keep his family afloat, Malgas resorted to entertaining motorists and passersby in Blouberg, Cape Town, with funny placards. His honest humour, which is sometimes about politicians, has earned him a reputation and a living.

He said his efforts did not instantly take off, but some kind motorists kept him going.

On the flip side though... the sun is up. #grateful #capetown #abundance

I am grateful though for Level 1. Tourists for the economy will do great. More money, more jobs. Blessed 🙏. . Stay Safe #capetown

“I was under pressure staying at home and doing nothing. I was thinking about how I would survive. One day I thought about what could work. I wanted to make an income. The first day didn’t go so well because motorists are used to beggars and no-one understood what I was doing and why.

"It was not easy in the beginning but some were understanding and found my signs funny. That motivated me to continue.”

Brendan Cottle, one of the motorists touched by Malgas' story, launched a BackaBuddy crowdfunding page in July, aiming to raise R250,000 to buy him a house.

“I drove past him at the Table View traffic lights. I pulled over and struck up a conversation because I was wondering why he was so happy, why he was here and what had happened. After three days I started the campaign and created an Instagram profile. I asked him to send me pictures whenever he has a new sign, and people just loved his jokes,” Cottle told TimesLIVE.

Malgas's Instagram bio has a link to the crowdfunding page to help him raise money. On the platform, he has nearly 4,000 followers who interact and encourage him.

“By creating an Instagram account, I wanted to raise awareness about his situation. The power of social media is undeniable,” Cottle said.

He said he believes the R250,000 target is achievable.

“I'm optimistic the goal can be achieved. Malgas said once we've reached the target, he will buy the house and furnish it, and will start a business with the rest of the money. He wants to start a T-shirt printing business,” Cottle said.

Malgas said he is touched by the kindness of strangers.

“I'm grateful and I wish them abundance. They have their own problems but they took the little out their pockets to help me. It means a lot.”

Watch his story below:

ActionSA leader Herman Mashaba is not yet gunning for any major provinces, but wants to first secure an outright majority in Johannesburg, Ekurhuleni ...
Politics
1 year ago