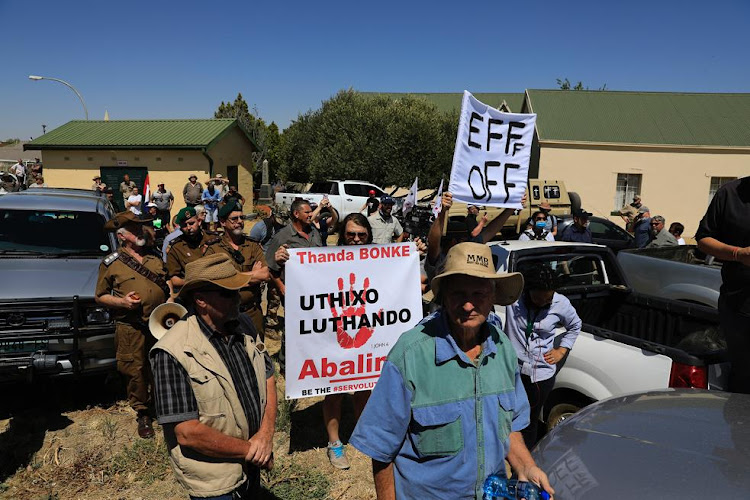 The farming community in SA says it wants an end to violence in farms after the murder of farm manager Brendin Horner allegedly by Sekwetje Mahlamba and Sekola Matlaletsa.
Image: ALON SKUY​

Another suspect arrested for riotous acts during Senekal protests

A 33 year-old man has been charged with attempted murder, public violence, arson and malicious damage to property during the Senekal protests over the murder of Brendin Horner.

We are not here to support criminals, but against those giving middle finger to SA: Malema

EFF leader Julius Malema said the EFF came to Senekal on Friday “to stand toe-to-toe with racist and white terrorists who think they can use a small town to show a middle finger to the whole country”.

Earlier in the day, Free State police announced that the N5 road running through Senekal had been temporarily closed.

We are not here to support criminals, but against those giving middle...

Various political parties and community groups came out in numbers in Senekal on October 16 2020.

The marches and protests were ahead of local farmer Brendin Horner’s alleged killers appearing in court.

@Julius_S_Malema says they are not in #Senekal in support of criminals. @TimesLIVE pic.twitter.com/iS4trdKbqO

“We are prepared to die,” @Julius_S_Malema tells supporters in #Senekal @TimesLIVE pic.twitter.com/9HwnmFEWyD

Give me bail or I can't collect disability grant, Senekal suspect tells court

An investigating officer, who took to the stand in the Senekal magistrate’s court in the bail application of the two men charged with killing farm manager Brendin Horner, on Friday painted a grim image of how the victim was severely tortured before he died.

Capt Gerhardus Myburgh, who testified in the two suspects' bail bid, said Horner’s body was found on October 2 on the Free State farm where he worked.

Sekwetje Isaiah Mahlamba and Sekola Piet Matlaletsa are both asking for bail and have indicated they intend to plead not guilty to the murder and robbery of Horner.

Matlaletsa told the court he was not a flight risk. He said he provided for the family through his disability grant. He said the family also lived off the social grant for three of his four children. The oldest child was 19 and the youngest was nine.

Give me bail or I can't collect disability grant, Senekal suspect...

From court appearance to Bheki Cele's promise for justice: 5 must...

One person has been arrested after being found in possession of an illegal firearm at a roadblock just outside Senekal in the Free State on Friday morning, police minister Bheki Cele confirmed.

He said police started setting up roadblocks leading to the farming town on Thursday in anticipation of crowds attending the bail hearing  of Sekwetje Isaiah Mahlamba and Sekola Piet Matlaletsa. The men are charged with the murder of 21-year old farm foreman Brendin Horner.

Man with illegal firearm arrested as crowds gather in Senekal for...

Tensions are high in Senekal as EFF supporters and members of the farming community gathered in the Free State town on Friday, when two men alleged to have killed farm manager Brendin Horner appeared in court.

IN PICTURES | Tense stand-off in Senekal between EFF supporters and...

The state believes Sekwetje Isaiah Mahlamba and Sekola Piet Matlaletsa - the two men alleged to have murdered farm manager Brendin Horner - may have bragged and confessed to the killing while enjoying beers a few hours after the murder.

Presenting his information at the Senekal magistrate’s court on Friday, where the bail bid of the accused was being heard, the prosecutor* told the court the state had at least two witnesses who could attest to this.

Both Senekal suspects made incriminating remarks: prosecution in...

The National Spokesperson @vuyanipambo leading Fighters in revolutionary song ahead of the Commander-in-Chief @Julius_S_Malema address outside Senekal Magistrates Court.

We must strike fear in the hearts of racists, they must never be comfortable in our democracy! #EFFinSenekal pic.twitter.com/ps5Y72L3NS 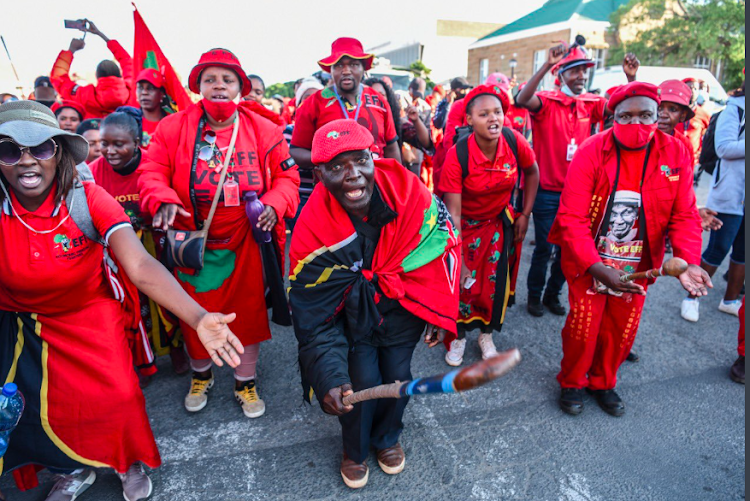 A sea of red has descended in the Free State Town of Senekal where two men Sekwetje Isaiah Mahlamba and Sekola Piet Matlaletsa accused of killing farm manager Brendin Horner will appear at the Senekal magistrate's court on October 16 2020.
Image: Via Twitter/@EFFSouthAfrica 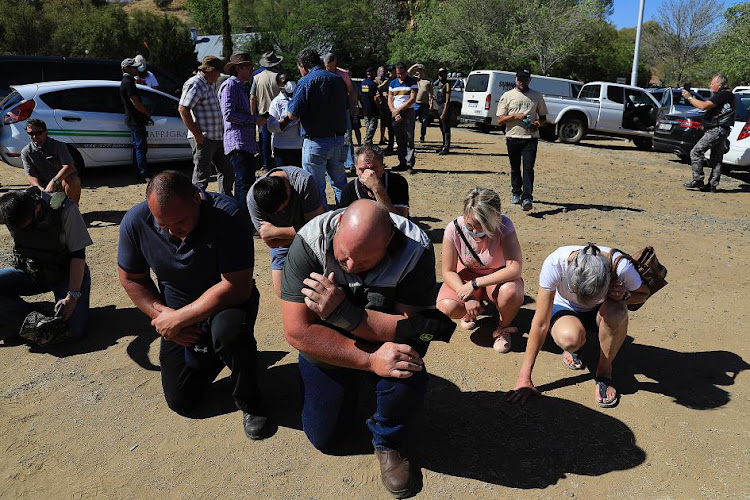 The farming community takes a knee as they raise awareness on violence in farms after the murder of Brendin Horner allegedly by Sekwetje Mahlamba and Sekola Matlaletsa.
Image: ALON SKUY​ 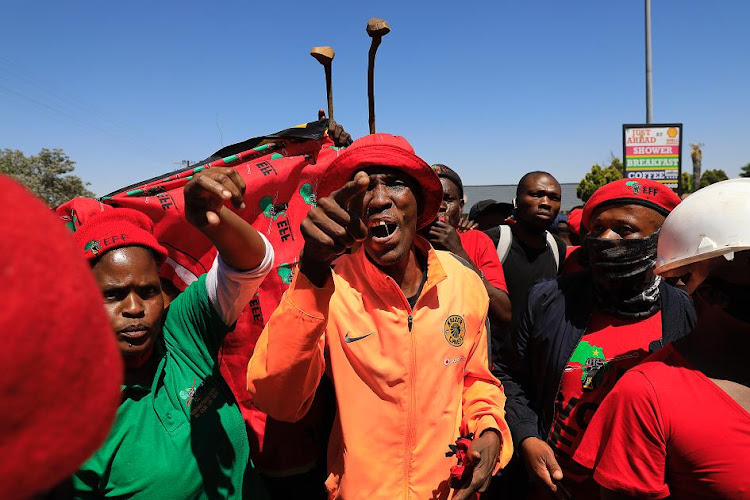 EFF supporters went in their numbers to the Free State town, Senekal to stage peaceful protests where two men accused of killing a farm manager appeared before the magistrate's court in Senekal on October 16 2020.
Image: ALON SKUY​ 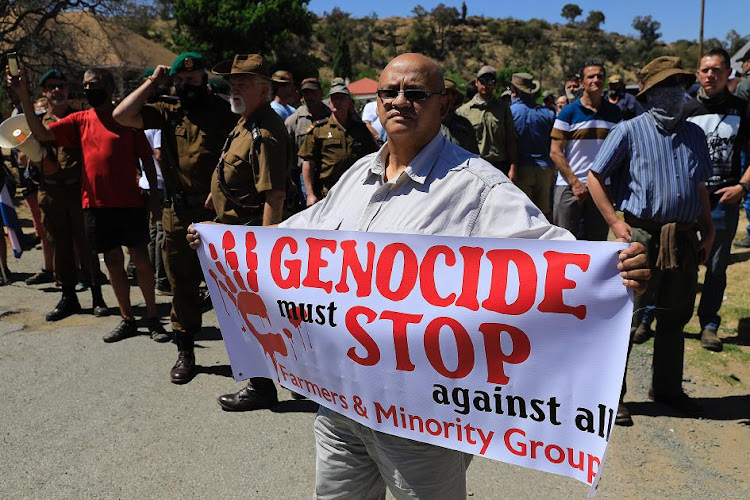 The farming community across SA gathered in Senekal on October 16 2020 to raise awareness about the violence in farms after the killing of farm manager Brendin Horner.
Image: ALON SKUY​

Bloodstains on clothing found in the home of one of the men implicated in the murder of Senekal farm manager Brendin Horner were in the spotlight at the Senekal magistrate’s court on Friday.

Sekwetje Mahlamba, who is applying for bail, told the court that bloodstains found on his pants had come from an animal slaughtered in September.

He said he had been at a local event where he helped with the slaughtering of an animal.

Only closing arguments by the legal teams and delivery of judgment may be broadcast in the trial of two men in connection with the murder of 21-year-old farm manager Brendin Horner.

TV cameras and photographers will be allowed in the courtroom during the adjournment.

This is after the prosecution asked for the case to be heard in camera, despite lawyers for Sekwetje Isaiah Mahlamba and Sekola Piet Matlaletsa signalling they have no problem with the media having access to the court.

EFF supporters, who have now gathered in the main road of Senekal, threw rocks and empty beer bottles at bikers who attempted to pass.

EFF supporters are now singing on the main road.

The 21-year-old girlfriend of murder accused Skwetja Mahlamba has proclaimed his innocence, alleging she had a solid alibi for where he was on the night farm manager Brendin Horner was murdered.

Speaking to TimesLIVE on Thursday, ahead of the trial resuming on Friday, Maleqhoa Sithole, said she was with him on the night that he was alleged to have murdered Horner along with co-accused Sekola Piet Matlaletsa.

Malema to address supporters in Senekal at noon

“If they dare provoke us, we will show them who we are. We are not scared of those Afrikaner boys,” says Shivambu

“There must not be any boer who did what they did last week. If they try that, they will know who we are today,” @FloydShivambu in #Senekal. @TimesLIVE pic.twitter.com/MmEC4ID2Y1

“If they dare provoke us, we will show them who we are. We are not scared of those Afrikaner boys,” EFF deputy leader @FloydShivambu tells supporters in #Senekal. @TimesLIVE pic.twitter.com/pom6BeZxkS

EFF leaders and members break in song ahead of Malema's speech

Scenes from the EFF’s gathering in #Senekal. @TimesLIVE pic.twitter.com/82Nc0YYaVc

Malema touches down in Senekal

The Commander-in-Chief and President @Julius_S_Malema with the leadership of the EFF have arrived at the Senekal Magistrate Court.#EFFinSenekal pic.twitter.com/9z22NeZV6s

Farmers and members of the public have gathered at a field outside a coffee shop in #Senekal. #Senekalprotest @TimesLIVE pic.twitter.com/jvhBnvkzva

'Fighters are ready to face racists head on': EFF

Fighter are ready to face racists head on.

No ANC supporters in sight

There is no ANC supporters in sight. #Senekal @TimesLIVE pic.twitter.com/CwNdrn1Obp

'Rather die to a man than let the enemy pass. Let's go': Malema ahead of EFF protest in Senekal

Peter Ramoshoana Mokaba once said,” Rather die to a man than let the enemy pass”. Let's go...

We are not step-children in this country; white arrogance has no place in our democracy.

Fighters in Senekal are here to ensure that the white minority respects state institutions and the rule of law. #EFFinSenekal pic.twitter.com/Dm7m1tTLuA

EFF supporters have now moved closer to the stage in #Senekal. @TimesLIVE pic.twitter.com/r2dLsWDi40

Road blocks and tight security encompassed Senekal, in the Free State, on Friday before the appearance of two men alleged to have killed farm manager Brendin Horner.

On the outskirts of the small farming town, police officers stopped and searched vehicles for weapons, ordering motorists out of cars as they did thorough checks.

Busses carrying EFF supporters clad in the party's red regalia were parked a short distance from the court.

The EFF have arrived in #Senekal. @TimesLIVE pic.twitter.com/Wdt4lT00tz

The road leading to #Senekal Magistrate’s Court has been barricaded with police tape and nyalas. @TimesLIVE pic.twitter.com/GrPnZ47i5r

EFF leader Julius Malema's stance on the violent protests in Senekal, Free State, has received mixed reactions in the past week from the public and politicians, some of whom have accused him of inciting public violence.

The unrest followed the murder of 21-year-old farm manager Brendin Horner, allegedly by two men who appeared in the Senekal magistrate's court on Tuesday last week. Their matter was postponed to Friday while they remain in police custody.

A police van was set alight and court property was damaged as protesters demanded entry into the holding cells.

'Just don't push us': 8 explosive quotes from Julius Malema on...

The SA Human Rights Commission (SAHRC) has called for calm as members of the EFF, civil rights group AfriForum and local farmers are expected to descend upon the Senekal magistrate’s court in the Free State on Friday.

This is ahead of the second appearance of two men, Sekwetje Isaiah Mahlamba and Sekola Piet Matlaletsa alleged to have brutally murdered 21-year-old farm manager, Brendin Horner on October 1.

The farming community takes a knee as they raise awareness on violence in farms after the murder of Brendin Horner allegedly by Sekwetje Mahlamba and Sekola Matlaletsa.
Image: ALON SKUY​