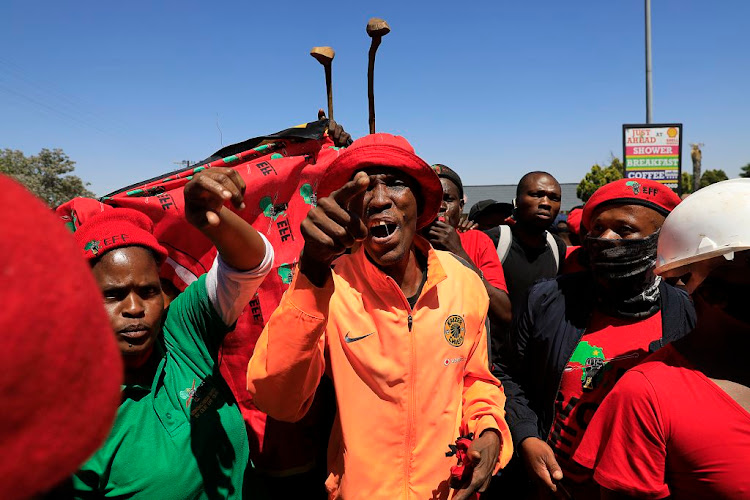 One person has been arrested after being found in possession of an illegal firearm at a roadblock just outside Senekal in the Free State on Friday morning, police minister Bheki Cele confirmed.

He said police started setting up roadblocks leading to the farming town on Thursday in anticipation of crowds attending the bail hearing  of Sekwetje Isaiah Mahlamba and Sekola Piet Matlaletsa. The men are charged with the murder of 21-year old farm foreman Brendin Horner.

He said a video of a trunk full of firearms which trended on social media had not been established as authentic by the police.

"Somebody might have edited old pictures. All relevant and capable structures that are here have not established that."

EFF supporters and farmers gathered in Senekal on Friday as two men alleged to have killed farm manager Brendin Horner appeared in the town's ...
News
7 months ago

Members of the farming community across SA gathered in Senekal to raise awareness about farm attacks.

Cele said the head of police operations in Senekal had been working on using "a soft approach" over the past few days.

"We have agreed we will have to use a soft approach, unless you are pushed to arrest people, including the clashes that happened earlier. It's not a picnic. People would have behaved that way."

State security minister Ayanda Dlodlo said there had not been "worrisome" incidents in the town on Friday.

Dlodlo commended the police for handling the situation "very well".

Free State police announced on Friday that the N5 road running through Senekal has been temporarily closed.
News
7 months ago

Tensions are high in Senekal as EFF supporters and members of the farming community gathered in the Free State town on October 16 when two men ...
News
7 months ago

The SA Human Rights Commission (SAHRC) has called for calm as members of the EFF, civil rights group AfriForum and local farmers are expected to ...
News
7 months ago