All 12 pistols had their serial numbers filed off 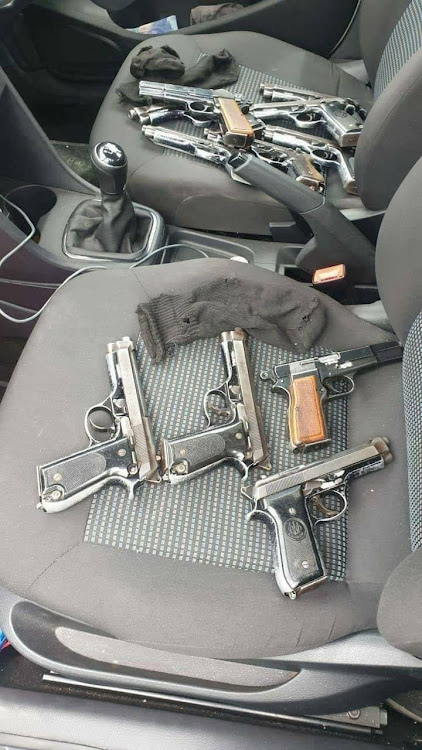 12 firearms with their serial numbers filed off were recovered by Cape Town traffic officers after a high speed chase on Sunday.
Image: SUPPLIED

A high-speed chase by Cape Town traffic officers led to the arrest of a man with a bag filled with 12 pistols, all with their serial numbers filed off.

Officers from the random breath testing unit were manning a checkpoint along Blaauwberg Road in Killarney, Cape Town, on Sunday morning when they stopped a driver of a white VW Polo at about 8am.

An officer noticed that the driver appeared nervous. The officer also spotted a red bag on the floor of the passenger seat and asked the driver to step out of the vehicle.

Instead, the driver put his foot on the accelerator and sped off. The officers pursued him, resulting in a high-speed chase along Potsdam Road and into the Dunoon taxi rank.

City of Cape Town traffic services spokesperson Maxine Jordaan said the driver then jumped out of the vehicle and a foot chase ensued. During the chase the man threw the bag under a minibus.

“Officers caught up with the suspect and recovered the bag, revealing 12 pistols with serial numbers filed off,” she said.

The 37-year-old suspect was arrested and detained at Table View SAPS and the matter was handed over to the police for investigation.

Mayoral committee member for safety and security JP Smith commended the officers for their actions but said the details of the case were “extremely concerning”.

“This is excellent work by our staff members, and I commend them for not giving up on the chase. It was an important recovery, because it means a dozen fewer illegal firearms off our streets,” he said.

“That said, the details of this case are extremely concerning. There are many unanswered questions, like where the suspect got the guns, and its intended use,” said Smith.

“I urge the SA Police Service to prioritise the investigation so that the truth may come out. It’s unlikely the suspect acted alone, and if there are more players involved in this, they need to be brought to book,” he said.

Police are still searching for four men behind the hit-style shooting of two women in Polokwane on Saturday.
News
1 year ago

Police in Mpumalanga arrested four men with firearms and suspected explosives at Malelane on Saturday morning.
News
1 year ago

Six men have been arrested in connection with an alleged cash-in-transit (CIT) heist in Burgersfort, Limpopo.
News
1 year ago

12 firearms with their serial numbers filed off were recovered by Cape Town traffic officers after a high speed chase on Sunday.
Image: SUPPLIED