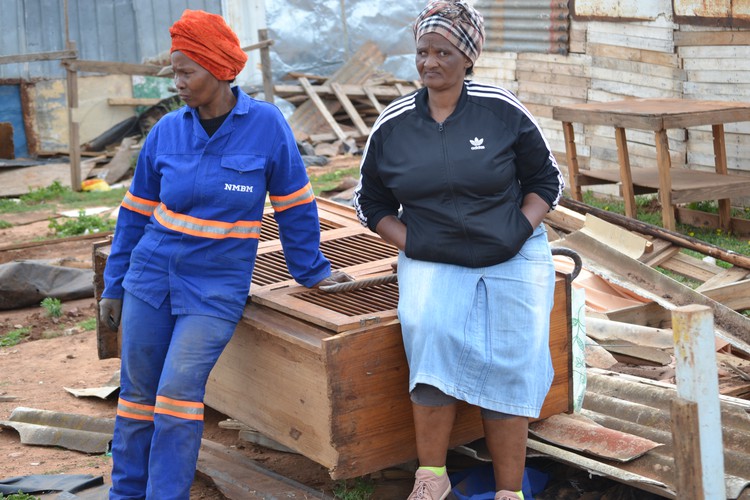 Noma Sozwe and Nokuzola Ponase gathered what remained of two shacks demolished by other land occupiers in Gunguluza in Uitenhage at the weekend. The area has become overcrowded and the demolishers accused shack owners of no longer using the homes.
Image: Thamsanqa Mbovane/GroundUp

Noma Sozwe spent most of Sunday rebuilding her daughters' two shacks after the structures were demolished by a group of people who wanted to occupy the space in Area 11, Gunguluza, in Uitenhage in the Eastern Cape.

On Saturday, the group tore down more than 30 shacks they claimed were not being used by the owners.

The group were upset because they apparently believe that if their shacks are not on the site, they will not benefit from the building of 846 toilets for phase two of a human settlements project in the area.

In July, the community protested, demanding that the 846 toilets be built as part of the municipality’s Covid-19 plan. The construction had been stopped. This is the biggest informal settlement in Uitenhage with more than 3,000 shacks.

Confronting white supremacy and 'taking over the banks': EFF reflects on Senekal 'success'

EFF deputy president Floyd Shivambu on Sunday praised the opposition party's supporters after demonstrations in the small town of Senekal in the Free ...
Politics
1 year ago

“This is devastating. I spent more than R4,000 on building material for both my daughters’ shacks when I invaded the land in January 2019,” said Sozwe.

She said she had built the shacks for her daughters because her RDP house was small and had become overcrowded.

She said her daughters had not been sleeping in their shacks because both had newborn babies so they were staying with her. However, the shacks “had furniture inside, including beds”, said Sozwe.

“This is an insult as most shacks that were broken down belonged to single women, some of whom have other reasons for not sleeping in their shacks,” she said.

Another resident, Noluvuyo Tsotsa, said she arrived in Area 11 on Sunday afternoon to discover her shack had been demolished.

“We have all invaded this land and no one has the right to destroy another invader’s shack,” she said.

“Soon we will have a general meeting and discuss the matter, which was initiated by a group of people from a certain corner. They will have to explain themselves.”

Ward 45 councillor Siphiwo Plaatjies said: “We don’t get involved in the destruction of occupiers’ shacks and we don’t mediate. This is still regarded as invaded land and we don’t interfere with who builds a shack. Our job is to see residents are getting proper services, and that’s all.”

On Sunday hundreds of people rioted in Knysna, looting businesses and bringing traffic on the national highway to a halt.
News
1 year ago

A portion of the M19 highway in Durban was blockaded with rubble, debris and burning tyres as aggrieved shack dwellers took to the streets on Monday
News
1 year ago