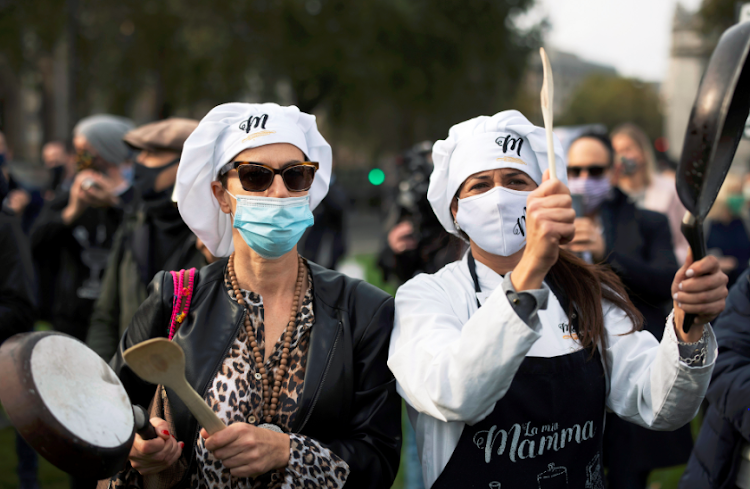 Demonstrators from the hospitality industry protest outside the Houses of Parliament as the coronavirus disease outbreak continues in London Britain on October 19 2020.
Image: REUTERS/Simon Dawson

The health ministry said on Tuesday that this meant there were now 706,304 confirmed cases across the country.

There were also an additional 164 Covid-19 related deaths recorded since the release of the statistics on Monday night, taking the national death toll to 18,656.

Italy's southern Campania region said on Tuesday it planned to introduce a nighttime curfew from the weekend, while other areas started drawing up their own restrictions to tackle a surge in Covid-19 cases.

The Italian government imposed a nationwide lockdown when the epidemic took hold in March, but with a second wave now sweeping the country it has urged local authorities to decide what is best for their own regions.

"We are in a completely different situation to the first wave," Prime Minister Giuseppe Conte told a news conference.

The so-called TERS payments were introduced by the government to provide between 38% and 60% of the salary of employees laid off directly as a result of the pandemic.

Thousands of workers in SA have lost their jobs as one of the world's toughest lockdowns saw many businesses permanently close their doors.

The Table Bay Hotel is famous for its views in Cape Town. But it’s what goes unseen that has allowed the five-star hotel to reopen its doors amid the coronavirus pandemic.

Disinfecting machines, electrostatically charged mist and a lot of invisible sanitiser are just some of the weapons deployed against the pandemic ahead of the hotel’s official opening on October 30.

Hotel managers this week revealed the extent of their antivirus arsenal, which they hope will go some way to enticing tourists back to one of the country’s landmark hotels.

Civil rights organisation Dear SA is challenging the extension of the national state of disaster, and has called on co-operative governance & traditional affairs (Cogta) minister Nkosazana Dlamini-Zuma to give reasons for the extension or face litigation.

The extension of the national state of disaster was announced last Wednesday. It will now end on November 15. It was introduced by President Cyril Ramaphosa on March 15 to allow the government to put together regulations to help curb and deal with the spread of Covid-19.

In a lengthy letter addressed to Dlamini-Zuma on Tuesday, Dear SA, through its lawyers Hurter Spies attorneys, said the extension of the national state of disaster was “unlawful, unreasonable and reviewable”.

A Gauteng wedding dress retailer has shut up shop without warning, leaving scores of brides without the gowns they’d paid for in full or in part.

A handwritten note posted on Eurobride’s Bryanston store reads: “Due to the current economic state in our country and the rest of the world, Eurobride has not been able to recover financially to open our doors again.

“Regretfully we are not able to fulfil our obligations to all our clients.”

The CFO of the department of correctional services, Nick Ligege, is being investigated by the SIU for allegedly awarding PPE tenders worth more than R50m to 23 companies linked “to (his) friends and family members”.

This was revealed in parliament on Tuesday by the SIU head advocate Andy Mothibi and his team during a meeting with the legislature's public accounts committee (Scopa).

Mothibi and his team told MPs that they had received the allegations against Ligege in August and immediately commenced with the investigation against him.

The Gauteng health department says the Nasrec field hospital will remain open until January, as it closes the other three quarantine/isolation sites.

Gauteng department of health spokesperson Kwara Kekana said Nasrec will not close because the threat of Covid-19 infections has not completely reduced in the province at the moment.

“Due to low demand for services in these facilities, and the need to make use of the venues by the owners, Telkom and Transnet sites were closed in August and September respectively, while the Eskom site is expected to be closed by the end of November,” she said.

A roundup of the latest research on the coronavirus

The following is a roundup of some of the latest scientific studies on the novel coronavirus and efforts to find treatments and vaccines for Covid-19, the illness caused by the virus.

Young, healthy adults with Covid-19 who do not require hospitalisation are still at risk for long-term health problems, Oxford University researchers found. They studied 201 recovering UK patients with an average age of 44, more than 90% of whom did not have risk factors such as diabetes, high blood pressure, or heart disease. Only 18% had been sick enough to be hospitalised.

A roundup of the latest research on the coronavirus

There is a significant chance SA could be hit by a second Covid-19 wave.

This is according to health minister Zweli Mkhize, who on Monday expressed concerns over the increase in positive cases.

Mkhize and his wife, Dr May Mkhize, tested positive for Covid-19 on Sunday, and warned of a possible resurgence of the coronavirus in the country.

WATCH | 'When Jerusalema gets in, all measures go out': Kenyan minister urges youth to social distance

The video shared on Monday by TV station NTV Kenya is from a Sunday media briefing about Covid-19 infections in the country.

The minister expressed concern about the flouting of preventive measures, particularly by young people in bars and pubs since they were reopened three weeks ago. He said the health ministry had noted an increase in the country's infection rate which could result in a second wave.

CS Kagwe: Jerusalema is now the main thing in bars, once it gets in, all Covid-19 measures go out. pic.twitter.com/drwYzmfhHX

WATCH | 'When Jerusalema gets in, all measures go out': Kenyan...

Durban residents can finally take a dip in the ocean after they were unable to do so for more than 200 days due to the Covid-19 lockdown.

Most beaches in the greater Durban area are open for swimming.

Swimming was prohibited since lockdown was imposed in March.

India posted its lowest daily coronavirus caseload in nearly four months, data from the health ministry showed on Tuesday, as new cases maintained decreasing trend from a peak in September.

The country reported 46,790 new infections in the last 24 hours, taking its tally to nearly 7.6 million - the second highest behind the United States. It also reported 587 deaths, taking the total to 115,197.

Experts have warned that infections could rise in India as the holiday season nears, with celebrations for the Hindu festivals of Durga Puja and Diwali due this month and in mid-November, respectively.

Pub operator Marston's launched consultations on up to 2,150 job losses on Thursday, while J D Wetherspoon accused the British government of panicking with new coronavirus restrictions it said could damage the entire economy.

Pubs, restaurants and other leisure businesses were ordered to shut early across England last month, and the government this week introduced a three-tier system that requires pubs and bars in areas of "very high" infections to close.

Here's a list of British pubs, food chains and hotel groups that have announced job cuts over the past few months:

Pub operator Marston's launched consultations on up to 2,150 job losses on Thursday, saying new UK coronavirus restrictions had forced its hand after months of progress in reopening hundreds of its pubs.

Whitbread said last month it had begun formal consultations on UK job cuts equating to 18% of its workforce, and expected a large proportion of them to be voluntary.

J D Wetherspoon on Friday announced a further 108 job cuts after in August it said it would cut up to 130 jobs at its head office and last month added that 400 to 450 airport employees could lose their jobs as it deals with depressed demand.

InterContinental Hotels will reduce staff by 10% at the corporate level, its boss said last month, after the Holiday Inn-owner's revenue more than halved and profit slumped 82% in the first half of 2020.

British coffee and sandwich chain Pret A Manger said on Friday it would close six more shops and likely cut a further 400 jobs as trading had deteriorated in recent weeks.

Privately-held restaurant group Pizza Express said in August it would close 73 restaurants in the UK, impacting 1,100 jobs, as lockdowns and higher costs disrupted its business.

Costa Coffee, a unit of Coca-Cola Co, said last month that a plan to deal with the hit to its UK stores from the health crisis could result in 1,650 people losing their jobs.

Making most of Covid-19: ICU built at military hospital in five weeks

Defence and military veterans minister Nosiviwe Mapisa-Nqakula said Covid-19 presented itself as an opportunity for the 1 Military Hospital in Pretoria, which now has a fully equipped ICU ward.

The department of public service & administration (DPSA) handed over the seventh-floor ward at the hospital to Mapisa-Nqakula on Monday, after it underwent renovations to convert it to a Covid-19 high-care ward as part of a legacy project.

The ward has undergone major renovations, with 78 ICU beds equipped with ventilators. There are single rooms and four-bed rooms in the ward, which are equipped to deal with Covid and other patients.

Making most of Covid-19: ICU built at military hospital in five weeks