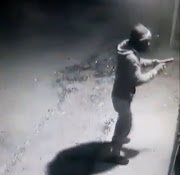 Image: Screenshot A screenshot from the video shows the perpetrator cocking his gun before firing several rounds into a steel gate of a tuck shop in Esikhaleni, northern KZN, last week.

A 31-year-old KwaZulu-Natal business owner is recovering in hospital after being shot and injured during what is believed to have been a foiled business robbery last week.

According to police, the incident occurred at Ndaya Reserve in the township of Esikhaleni, northern KZN, on Thursday.

“It is alleged that on October 15 at 10.55pm, a 31-year-old male was shot and injured by an unknown man who fired shots towards him while he was at his business premises at Ndaya Reserve.

“He was taken to hospital for medical attention. A case of attempted murder was opened at Esikhaleni police station for investigation,” she said.

CCTV footage of the incident shows the victim quickly running into his tuck shop and shutting his gate as a man brandishing a firearm runs after him.

One shot is fired into the store before the victim shuts his steel gate.

The perpetrator then continues to fire several more rounds before fleeing the scene. He is still at large.

Police are investigating a case of attempted murder after a man was shot and injured during while at his business premises at Ndaya Reserve in eSikhaleni, northern KZN, last week. The victim is recovering in hospital.@TimesLIVE pic.twitter.com/B8o0fvPrf7