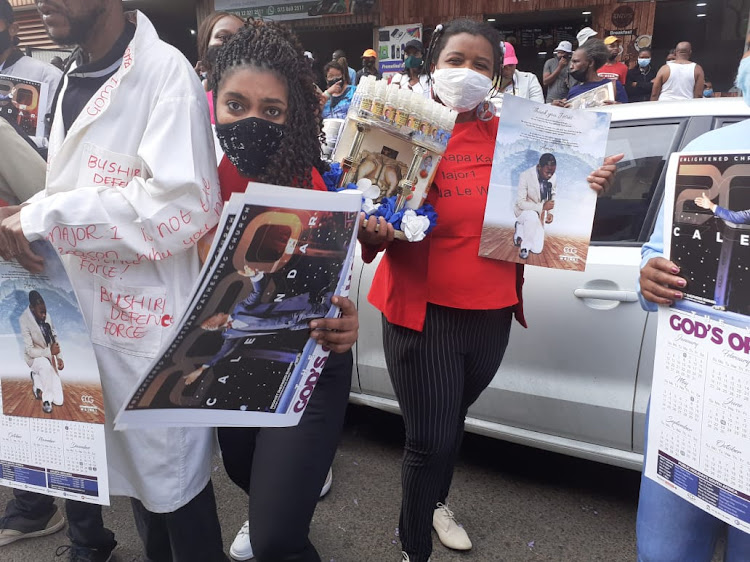 This as their bail application was postponed for further argument.

Bushiri, his wife and a third suspect, Landiwe Ntlokwana, appeared at the Pretoria specialised commercial crimes court on Wednesday on charges of money laundering, theft and fraud.

Ntlokwana is a member of Bushiri's Enlightened Christian Gathering church.

Bushiri handed himself over to the Hawks on Tuesday, while his wife Mary was arrested at their home earlier that day. The Hawks said Bushiri initially tried to “evade” its officers and then handed himself over in the presence of an “entourage of attorneys”.

Hawks spokesperson Col Katlego Mogale said four people, including another couple, were arrested for their alleged involvement in fraud and money laundering worth R102m.

On Wednesday, the state opposed Bushiri, his wife, and Ntlokwana’s bail bid, arguing that the case was at an advanced stage. It noted the home affairs department’s notice withdrawing Bushiri and his wife’s permanent residence permits.

According to court papers submitted to the Pretoria high court, where Bushiri filed an application challenging home affairs’ withdrawal notice, the couple’s permits were withdrawn because they were issued in “error”.

In this application, the Pretoria high court on Wednesday ruled that the home affairs notice be suspended until Bushiri and his wife pleaded to the money laundering charge.

“The applicant and his wife shall, once their plea to the charges has been noted in case number CC14/2020, be afforded a period of 30 days from date of the plea, within which to make any formal representations (if they so wish or are advised to do so) as envisaged in the notice date 2 August 2020,” the court ruled.

'Why did he wait three years?': Hawks on Bushiri extortion claims

An army of men wearing black suits, and others in camouflage regalia with a “Major 1 troop” inscription, lined up in front of the court building.

One of the supporters, Lethiwe Ndlovu, said she woke up at 5am to support “father” Bushiri.

Another supporter, who didn't want to be named, said she was there to support Bushiri because of the positive affect he had on her life.

“I am here to support my spiritual father and mother. In the past five years since I have been under their mentorship, they have affected my life positively, in every way; academically, spiritually, so I am here to stand with them. At the moment I don't have information about the case but I’m here to say let justice prevail,” she said.

In a statement released by the church after court proceedings, Bushiri said he was disappointed that the bail application was postponed.

“We are unhappy about what we feel is a weaponisation of the criminal justice system,” the statement read.

'It's not fair': Shepherd Bushiri disappointed by fraud case delay

The case against self-proclaimed prophet Shepherd Bushiri and his wife Mary has been postponed to October.
News
1 year ago

The bail application in the fraud and money laundering case was postponed to Friday for the state to reply to the defence’s argument.

The court ordered that the trio remain in custody pending Friday’s proceedings.

It did not accede to the defence’s request that the applicants be kept at the same police station they were detained at on Tuesday, saying that it was a decision which was in the hands of the police.

Earlier, their lawyer, Anneline van den Heever, argued that the state should have a watertight case before making an arrest.

“People cannot be arrested and then the police are still going to investigate,” she argued. She contended that the state and police had had more than two years to investigate and deal with the case.

Outside court, a group of Bushiri supporters clad in T-shirts bearing his face and carrying placards, chanted songs in support of their leader.

Self-proclaimed prophet Shepherd Bushiri handed himself over to the Hawks on Tuesday, while his wife Mary was arrested. Another pastor and his wife ...
News
1 year ago

The fraud and money laundering case against self-proclaimed prophet Shepherd Bushiri and his wife Mary has been postponed to 2021 for trial.
News
1 year ago