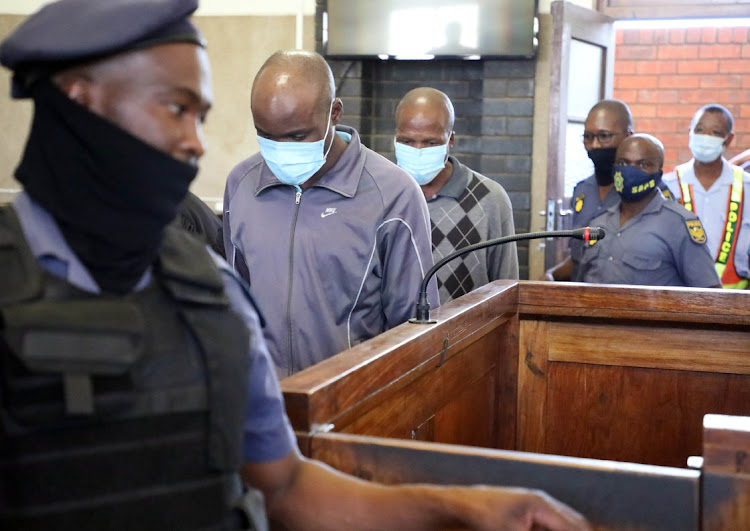 The blood samples lifted from Brendin Horner’s bakkie do not match those of the two men accused of his murder.

This revelation emerged during the bail application of Sekola Matlaletsa, 44, and Sekwetja Mahlamba, 32, in the Senekal magistrate’s court on Tuesday. The two men are accused of murdering Horner on October 2.

The prosecutor, who cannot be named or have his pictures taken due to a court order, said one of the DNA samples lifted from Horner’s bakkie did not match one of the accused, while the sample taken from the other accused was inconclusive and could not be analysed.

“Two samples were taken from the accused to match them with DNA found in the bakkie. One of the samples came back defective and the other one did not match,” the prosecutor said.

The prosecutor said the tests were conducted by a Saps-accredited private laboratory.

He said results for DNA samples extracted from a knife, the rope used to strangle Horner and clothes found at the scene could take up to 40 days to finalise.

After being denied bail in the Senekal magistrate’s court last week, André Pienaar approached the Bloemfontein high court, which on Monday allowed ...
News
1 year ago

Investigating officer Capt Gerhardus Myburgh previously told the court that blood swabs taken from inside and outside Horner’s bloodied bakkie revealed that this was the blood of three men (Horner, Matlaletsa and Mahlamba).

Myburgh said the accused had slight abrasions on their elbows when they were arrested a day after Horner’s murder.

Mahlamba’s lawyer Joseph Kgoelenya argued that there was nothing linking his client to Horner’s murder and that the state's case was weak and based on circumstantial evidence.

During cross-examination, Myburgh told the court that investigations were not yet concluded and that results of palm prints lifted from the crime scene were outstanding.

In the absence of forensic evidence, what do we have?

Machini Motloung, Matlaletsa’s lawyer, argued that the state had no evidence against his client and that it was clutching at straws.

Motloung argued that Myburgh was biased in his investigations as he accepted circumstantial evidence given to him by witnesses which was inconsistent with the alibi provided by Matlaletsa’s wife.

“My client’s [Matlaletsa] wife gave police a statement that he was at home [on the night of Horner’s murder] but he chose not to use it,” he said.

“His alibi was confirmed by his wife and it was conveniently left out of the evidence-in-chief. In the absence of forensic evidence, what do we have?” Motloung asked the court.

He argued that his client’s version of events should be taken into consideration when judgment on bail is handed down.

Kgoelenya and Motloung argued that their clients' release on bail would not cause public unrest and that they would not interfere with investigations and witnesses.

The matter was postponed to Thursday.

The police officer investigating the murder of a Paul Roux farm manager has told the court that one of the witnesses in the matter will need to be ...
News
1 year ago

Bloodstains on clothing found in the home of Sekwetje Mahlamba were in the spotlight at the Senekal magistrate’s court on Friday in the murder of ...
News
1 year ago