SANDF confirms deputy surgeon-general Noel Ndhlovu was placed on special leave this week as wife gets bail of R80,000 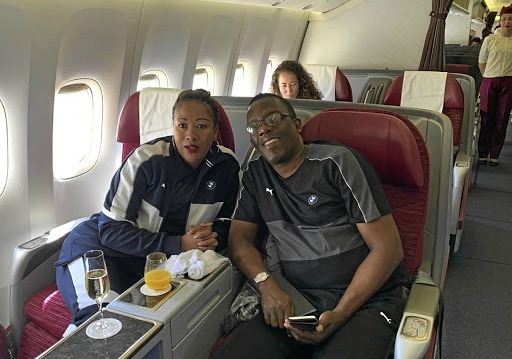 “After the spouse of the deputy surgeon-general was arrested and released on bail, SANDF looked for legal opinion on a way forward as this affected the SANDF,” Dabula said. He said the legal opinion advised that Ndhlovu be placed on special leave.

A former SAA cabin attendant who was living the high life after marrying her army boss boyfriend — and who was allegedly “gifted” defence contracts ...
News
1 year ago

SANDF spokesperson Col Louis Kirstein said: “The SANDF does not speculate on the outcome nor the progress of any investigation until it is presented to the authority of the law, which is in this case the court.”

A letter to Ndhlovu, dated October 19 and seen by TimesLIVE, states: “It was brought to the chief of the SANDF's attention that on October 14, the spouse of Maj-Gen Ndhlovu was arrested for alleged serious criminal activities. She appeared in court and was released on bail. In this case, the department of defence is one of the complainants.”

It continues: “Based on the above allegations and the fact that the member forms part of the SA Military Health Services command council and sometimes represents the surgeon-general at military command council meetings, the chief of the SANDF was advised to give the member a precautionary leave of absence.”

The letter gave Dabula a day to report that he had actually placed Ndhlovu on special leave.

Ntsondwa-Ndhlovu’s arrest follows a tender allegedly being awarded by the SANDF to her company, Umkhombe Marine, to transport SANDF equipment back to SA from other African countries. The contract value was about R24m.

Ntsondwa-Ndhlovu allegedly provided false information or documents as part of the tender process.

Thereafter she was awarded another contract of R103m, again to transport SANDF equipment. “But the soldiers were recalled from service and this led to the cancellation of the second contract,” Ngwema said.

Ntsondwa-Ndhlovu then claimed R30m expenses from the SANDF, saying this was what her costs were before the cancellation.

In 2016 when Nombasa Ntsondwa-Ndhlovu received defence tenders, her husband Noel Ndhlovu was at the time the person responsible for authorising all mission contracts.

Military police are investigating a former SAA cabin attendant who is living the high life after marrying her army boss boyfriend and scoring defence ...
News
2 years ago

Military police are now investigating suspected fraud and corruption in contracts awarded to Umkhombe Marine. Investigators smelt a rat when they examined some of the tenders Ntsondwa-Ndhlovu had secured. In one tender, for the transport of military equipment, rival bidders listed included companies that were later revealed to be a taxi business, a stationery supplier and a company that had closed down in 2010. Upon investigation, all the companies claimed to know nothing about any SANDF tender.

Public service regulations prohibit government employees from doing business with the state and compel employees to disclose their financial interests and those of their families and spouses.

Government tender documents require bidders to state whether they have a relationship with a state employee.

“This type of special leave is normally reserved for junior officials in the army. We suspect that there is an investigation against Ndhlovu and that is why he is on special leave,” Greef said.

Greef called on the SANDF to speed up the investigation.

A former SAA cabin attendant is living the high life after marrying her army boss boyfriend. Now military police are investigating whether the major ...
News
2 years ago

A former Newcastle municipality worker who is accused of fraud to the tune of more than R3m has been granted R50,000 bail.
News
1 year ago

Hawks nab director of company over R4.8m fraud in OR Tambo Municipality

A 48-year-old woman was arrested on Thursday morning after her company allegedly defrauded the OR Tambo District Municipality in the Eastern Cape out ...
News
1 year ago