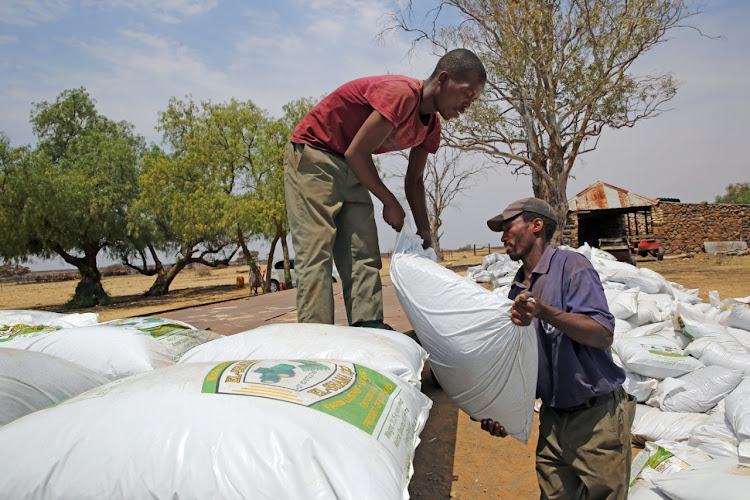 Farm employees are anxious about job losses in the wake of heavy financial costs sustained by their employers after wildfires ravaged Hertzogville in the Free State this week.

Itumeleng Setsetse, 31, an employee at a farm in Hertzogville, told TimesLIVE there was extensive damage.

“We’ve never seen anything like this around here. I've worked at the farm for seven years. It was painful watching animals die so brutally.”

Packing bags of animal feed donated by well wishers with a colleague, he said: “What is left is for the owner to tell me what’s what. I don’t have any idea what's going to happen with my job.

“The staff accommodation burnt to the ground. I think I will have to move to their farmstead, depending on how things go.

“My life will change because I have no idea how I will take care of my three children and my wife.”

While the community of Malebogo informal settlement, Hertzogville, is responsible for fires that have ripped through Free State farmlands this week, ...
News
11 months ago

Vos Senze, 39, was on his way back to work on Sunday from his home when he encountered the protest action.

“I come from Malebogo township, where the protest took place. I called my employer and told him I could not make it back to work on Monday as the road was blocked and the protesters wanted to burn my horse cart,” he said.

“At that moment, we didn’t know things would turn so ugly. I have no idea what will happen in terms of work. We will wait and see. The reality is we might lose our jobs.”

We didn’t know things would turn so ugly. I have no idea what will happen in terms of work.

A farmer who asked not to be identified said he was emotionally shell-shocked and uncertain about his finances due to the loss of his livestock.

“I’m going to try and keep my employees, but if my money is finished, I will have to let them go. I have fewer cows and there’s less work.

“I am still dealing with the shock — so much so that when I see people waiting at the corner for a piece job at a farm, I get infuriated because it's probably the same people who started the fire,” he said.

A group called Hertzogville Fire Complex, which is providing updates on the spread of the blaze and efforts to combat the flames, said the fire had reignited on Thursday evening.

“At approximately 5.40pm thunderstorm activity created extremely strong wind and the fire reignited and spread rapidly in a south, south-easterly direction. All resources were applied in an effort to contain the fire.

“More thunderstorm activity and sudden change of wind speed and direction caused the fire to develop over a large area, and at about 3am our resources were instructed to withdraw due to fatigue.”

A firefighter was injured and had to be rushed to hospital after runaway fires wreaked havoc in the Northern Cape on Thursday.
News
11 months ago

Hundreds of cattle had to be euthanised to relieve their suffering from extensive injuries sustained during fires which caused havoc in the Free ...
News
11 months ago