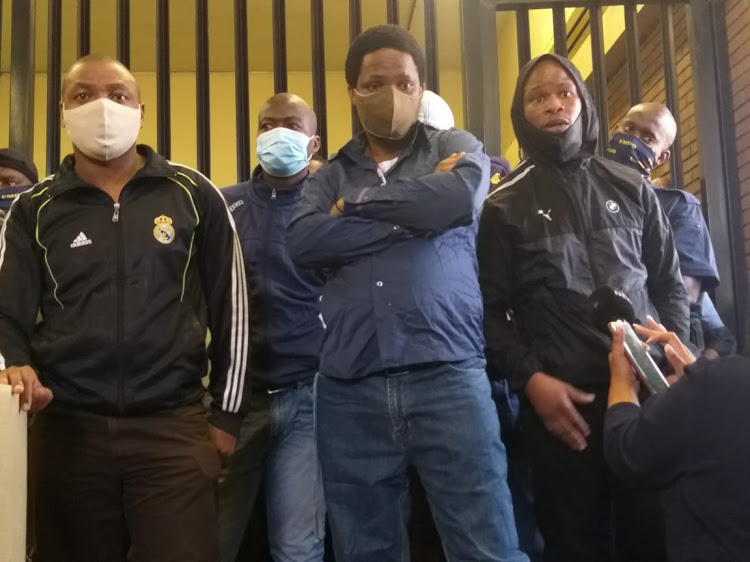 Some of the accused in the Senzo Meyiwa murder trial appearing in the Boksburg magistrate's court on Tuesday.
Image: Antonio Muchave

The family of murdered soccer player Senzo Meyiwa on Tuesday said they were shocked by the incidents that unfolded at the Boksburg magistrate’s court when the five murder accused appeared.

“I am shocked because the police are the ones who brought them here, alleging they have also made confessions. I was hoping they would step into the box [court dock], but they don’t want to enter,” said Senzo's brother, Sifiso Meyiwa.

Some of the five suspects, who appeared with their feet shackled, had refused to get into the dock, saying they had nothing to do with the murder of the soccer star who was gunned down in Vosloorus in October 2014.

Mncube, Maphisa and Ntuli said they did not see the need to apply for bail as they were in custody on other cases. Sibiya and Ntanzi have not applied for bail.

The accused, who all wore masks in accordance with the lockdown regulations, at times looked at each other and shook their heads as proceedings got under way and their charges were read to them.

The two suspects who were eligible for bail said they had no idea how they were linked to the case. One of the suspects disputed the statement made by police minister Bheki Cele  that they were arrested on Monday.

The suspects arrested in connection with Senzo Meyiwa's murder say they have no idea how they were connected to the crime.
Image: Via Instagram

This is the second time the police have brought a suspect to court over Meyiwa's murder.

Shortly after the killing in 2014, the police had arrested a man and brought him to the same court. He was later released and pursued legal action against the police for wrongful arrest.

When Meyiwa was killed in October 2014, he had been at the home of his girlfriend, Kelly Khumalo.

Khumalo, her mother Ntombi, sister Zandi, Zandi’s boyfriend Longwe Twala, his friends Mthokozisi Twala and Tumelo Madlala, and their son, who was four years old at the time, were also present.

Allegations surfaced at the time that Meyiwa was killed in a botched robbery, but AfriForum, which has been helping in the investigations, on Tuesday announced it was an assassination.

All the accused, with the exception of Ntanzi, did not have legal representation.

They are facing counts of murder, attempted murder, robbery with aggravated circumstances and unlawful possession of a firearm and ammunition.

President Cyril Ramaphosa has welcomed the arrest of five people implicated in the 2014 murder of soccer player Senzo Meyiwa.
News
1 year ago

The motive behind the murder of Orlando Pirates goalkeeper Senzo Meyiwa might be "bigger than we previously understood".
News
1 year ago

If there’s a hit, there’s a mastermind, says Gerrie Nel after Meyiwa arrests

Five people have been arrested for the Bafana Bafana star’s murder, which was ‘not a botched home invasion’
News
1 year ago