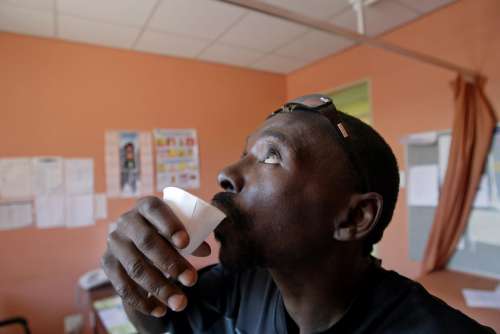 Western Cape health authorities are turning their attention to TB after testing for the killer disease, which remains the leading cause of deaths, dropped by half during the lockdown.
Image: ESA ALEXANDER

After a huge decline in the number of people testing for tuberculosis during the lockdown, Western Cape health authorities are now turning their attention to the killer disease and will soon be offering self-screening at home.

Western Cape premier Alan Winde said the screening of potential TB patients at home was part of the province’s efforts to find patients instead of waiting for them to present to clinics.

As with Covid-19 screening, TB patients could screen themselves using their mobile phones and filling of questionnaires. An algorithm would then determine their risk and recommend testing, if required.

In June, the Western Cape experienced a dip of about 48% in TB testing, but over the past few months the uptake of testing has been improving. By August the decline was measured at about 36%.

“As we did with Covid-19, we will also adopt hotspot-focused and behaviour change led approaches to prevent the spread of TB among those at risk,” he said.

Winde said he would use the provincial council on Aids, which he chaired, to further champion the battle against TB, and supported the Barcelona Declaration's intention of working towards the establishment of a new global parliamentary caucus to press for an urgent response to the TB epidemic.

The Eastern Cape, KwaZulu-Natal and the Western Cape had the highest incidence rates in SA, with reported rates of 692, 685 and 681 per 100,000 respectively for 2015. But the Western Cape has been doing well in terms of TB treatment, with statistics showing that showing that five of the six districts in the province ranked among the 10 best performing in 2018/19.

Winde said the province would be using the health-care technology and health systems that it used to beat Covid-19, “many of which can be used or adapted to prevent and treat other illnesses such as TB”.

“The Western Cape government is ramping up the delivery of other health-care services so that people can access the vital care they need, in a way that puts their dignity and wellbeing first. We believe that the lessons we have learnt and the systems we have put in place during Covid-19 will help us to achieve this,” said Winde.

Some of the Covid-19 innovations and programmes that will be readapted in the fight against TB, include telemedicine, use of about 3,800 community health-care workers who would be actively screening for TB, and medicine deliveries that were initiated during the lockdown to ensure that patients on chronic medication don’t default on treatment.

Tuberculosis patients who have to endure six months of treatment and more can now be successfully treated in four months when using newer TB drugs, ...
News
1 year ago

Winde said over the past seven months, “we have seen the number of people attending our health-care facilities for TB testing and treatment decline”.

“To address this, we are making use of these same community health-care workers to conduct other screenings in communities and in people's homes to identify other illnesses such as TB.”

After determining that diabetics were at the highest risk during Covid-19, the province introduced the virtual emergency care tactical operation (Vector) telemedicine project, in which a team of doctors kept contact with diabetic patients who had tested positive for Covid-19.

“This same system can be rolled out for other illnesses such as TB to manage high-risk patients and to ensure that they remain on their treatment regime,” said Winde.

“The community health-care workers, who have been actively screening for Covid-19, are now also screening for TB and other illnesses in people’s homes, rather than waiting for them to present to health-care facilities.”

TB patients  will continue having their medicines at home every month to ensure that they don’t default on treatment. The province would also be using additional GeneXpert testing machines that it got from the national department of health at the beginning of the pandemic to ramp up Covid-19 testing.

Pregnant women who contract Covid-19 are more likely to experience complications after birth compared to those who test negative, a new study has ...
News
1 year ago

The health minister says 2020 will go down as one of the greatest tests ever endured by humanity.
Politics
1 year ago